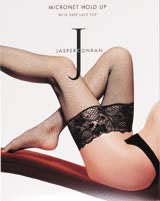 The high street is all of a flurry at the moment. Investors are swooping down on British retailers like Selfridges and most recently Debenhams, the subject of a £1.54bn offer by venture capitalist Permira (formerly Schroder Ventures).

Design has played a pivotal role in drawing attention to these two high street fixtures. The Selfridges story and that of its visionary management by Vittorio Radice – now at Marks & Spencer – has been well told in recent years, so now it’s time to look at Debenhams.

Last month saw the launch of the latest Debenhams designer brand, Floozie – a partnership between celebrity buddies Sadie Frost and Jemima French, who set up their FrostFrench label in 1999. It is the latest in a long line of high-profile brand launches created and managed by Debenhams’ in-house product branding team, headed by former M&K Design creative director Alyson Jakes.

She came to set up this team, initially using freelance staff, seven years ago after overseeing M&K’s Gateway to Somerfield rebranding. At that time Debenhams had around ten own-brands, now there are over 50. In its present form, the team has existed for about two years and now consists of four designers, three artworkers and six product brand managers.

‘Debenhams has a very broad target market, with a range of own-brand and designer brands used specifically to target different areas of this market. These range from younger, more contemporary own-brands through to our premium designer brands,’ says Jakes.

There are 102 Debenhams stores at present, though current planning will see this number being increased to 150 over the long term. These include outlets in Reykjavik, Stockholm, Dubai, Riyadh, Kuala Lumpur and Dublin. While the job of overseeing the interior design of these shops doesn’t fall to Jakes and her product branding team (it is handled within the communications division), they do have to manage the implementation of the brands in-store and on Debenhams advertising.

Jo Stanbrook, an ex-buyer and then brand manager at M&S, is now part of Jakes’ team. As a brand manager she is responsible for project managing Debenhams in-house branding, design, artwork, in-store implementation and external packaging briefs.

‘We are very much driven by the product. The buying teams will come up with a concept and then come and talk to us about names, brand identity and packaging requirements,’ explains Stanbrook.

Stanbrook looks after about 15 brands in the lingerie and swimwear division, many of which extend into the other five divisions. And that’s not many compared to some of her colleagues.

Typically, a new brand can be created in anything from two months to a year, Jakes explains. Once a new brand has been created in-house, the team has to work closely with the communications department’s interiors team to ensure it is projected correctly.

‘We are the custodians of the brand, and it’s our job to make sure that whenever a logo is used, from advertising through to in-store, it’s used consistently, and everyone understands how it should be applied. We do this using brand manuals, in which we set cohesive guidelines,’ Stanbrook says.

‘Because we have created the brands, we have very strong views on how they should be used, so it’s very important to all of us that we do keep a check on things,’ Jakes adds.

The legwork is done by four designers and three artworkers under the careful watch of design manager Paul Cartwright.

‘The designers are very busy, but we try to make a lot of space for them and I think we are quite protective of them. We work things quite flexibly so if they want to go off for a couple of days and work from home, it’s never a problem. Sometimes they do need to get away from the day-to-day routine of people asking questions all the time,’ says Jakes.

On top of the branding there is the physical packaging side of things as well, anything from designer jewellery boxes to core underwear packs. These are sourced by the product brand managers. The team’s external suppliers are briefed on the retailer’s up-and-coming products using preliminary sketches, and invited to submit ideas for suitable packaging.

Although there are one or two experienced packaging technologists working in-house, technology is not itself a dedicated function, so suppliers are expected to provide technical expertise. All told, the team has five designated UK packaging suppliers and nine in Hong Kong.

Jakes’ team does have some ongoing relationships with design consultancies, but essentially it is her job to cover as much of the work as possible. She says they tend to use outside groups for some new influence, or if there is a project that can’t be fitted in. There are two projects currently in progress that are being handled by outside consultancies, but Jakes is keeping details under wraps.

The main Debenhams signature is used as a brand label throughout the store and predates Jakes and her team. It hasn’t been touched, she says, though its application as part of the ongoing store modernisation programme is continually being re-evaluated. She recognises there are different perceptions of the Debenhams brand, depending primarily on where the customer encounters it. An Oxford Street customer will have different perceptions to a Hounslow customer, due to the nature of local demand and local competition.

But for now all thought is on the excitement around the outcome of the Floozie range, a project that took Jakes and her team just four months from start to finish. That’s not bad when you consider there are 50 other brands for the team to manage as well. After meeting with the actress-designer duo to talk through some of their product designs, Jakes and the team brainstormed a long list of potential names for the brand, which were then legally searched. FrostFrench then chose the final name while the visuals for the brand were being worked up.

Initiatives such as the Floozie brand just go to show that on the high street, mainstream does not have to mean mediocre. And don’t the venture capitalists just know it.

The design nerve at Debenhams

Debenhams has 34 own-brands and 17 designer brands, split across six divisions. These divisions are lingerie, accessories, cosmetics, womenswear and childrenswear, menswear and home