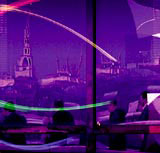 422 has created title sequences for the BBC’s election coverage, aired today (Thursday) and Friday in its Vote 2001 – The Verdict programmes.

The consultancy was briefed to create a sequence reflecting the BBC’s neutral coverage of the election. It features live action shots from around the UK and a politically neutral purple kite forms the focus of the sequence.