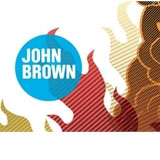 According to John Brown chief executive Andrew Hirsch, the intention of the exercise has been to develop a more cohesive identity that will be applied across the different strands of the business, including John Brown Junior. The in-house team first began working on the project three months ago.

The overhauled brand identity features a warmer colour palette, Galliard font and a more ‘clean, simple’ design, according to Hirsch. It will be used alongside photography and illustrations to create a more contemporary-looking identity overall. ‘The previous corporate look didn’t quite fit, it was too clunky,’ adds Hirsch.