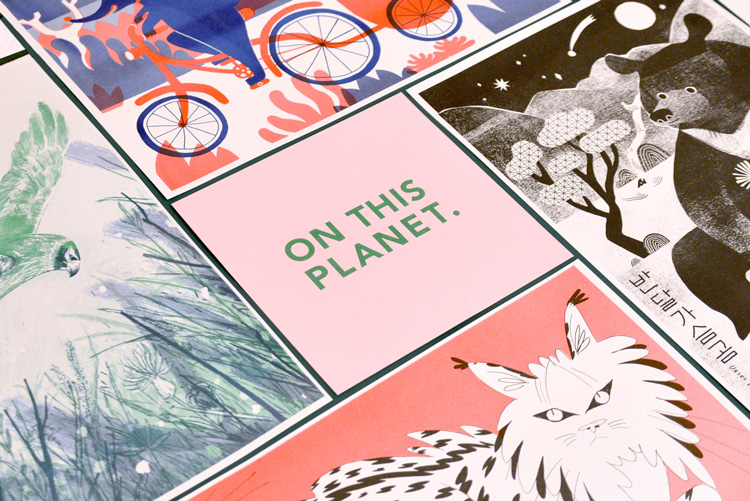 “Illustration can be very characterful,” says illustrator Jenny Tang. “I love how different styles and interpretations can really capture an animal’s personality. Environmentalism can easily be quite dour, so I wanted to create a positive, fun and accessible atmosphere.”

Tang has curated a new London exhibition called On This Planet, which will see artworks created by 34 different illustrators go on show, in aid of protecting animals’ habitats from destruction.

The artists were tasked with creating interpretations of animals that are at risk of habitat destruction, which resulted in an eclectic mix of illustrations, including polar bears, tigers, buffalo and sloths.

More obscure additions to the show include the kinkajou, a small, furry rainforest mammal native to South and Central America known for its penchant for honey, and the markhor, a large wild goat with peculiar screw-shaped horns, which is the national animal of Pakistan.

The printed artworks will be reproduced in bulk and sold at the exhibition, with money going towards the World Land Trust’s Buy an Acre scheme – where every £100 donated goes towards preserving an acre of land for wildlife.

Tang sourced the contributing artists through networking events, exhibitions and Instagram. While she says she was looking for a broad range of styles, her main requirement was whether the illustrators had experience drawing animals, and how “characterful” their depictions were.

The curator wanted the illustrators to pick their creature, as she wanted their “passion for a particular animal to come through in their drawing”, she says. To avoid having the same animal twice, she asked them to suggest which animals they wanted to draw, and she then told them if it was already chosen by someone else or was free.

Contributors include Lucie Ebrey, who has used many line weights to create a “distinctive and expressive” image of a tiger, says Tang, while Takayo Akiyama has created an “intimate” portrayal of a three-toed pygmy sloth, framed by a background of jungle fauna.

The 34 illustrations have been risograph printed by Tang herself; a process which uses a special printer and drums where the user inserts different coloured inks, printing an image onto a “master” sheet. This can then be reproduced multiple times onto paper or card. The process only prints one colour at a time, meaning one piece of card may be passed through the printer several times to achieve a full image.

The process is more environmentally friendly than other printing processes, as it uses minimal energy and natural inks, which are often soy-based.

“Risograph printing has become quite trendy in the art community, particularly in the independent publishing scene,” she says. “I bought my own risograph printer a few years ago, and I find you can build up colours to create very complex designs. It’s very geared towards being environmentally conscious, which is why I felt it was a great process to tie into the show.”

Tang says she felt illustration was the best format to stop the subject matter coming across too serious and severe, while also allowing the artists to be creative in their interpretations, giving them the chance to assign their creatures human attributes and “personality”.

“People naturally anthropomorphise animals, and it’s interesting to see what features or behaviours are exaggerated,” she says.

On why she decided to curate the show, Tang says the issue of endangered animals and extinction is close to her heart – and as an illustrator herself, she has always been interested in representing creatures of all shapes and sizes.

“I have always loved animals and the natural world,” she says. “That’s what got me into drawing in the first place. As a child, I would continuously be drawing creatures and making up my own too, while binge-watching Animal Planet.

“As an adult, I find constant inspiration in them – their shapes, characteristics and colours – so protecting them in any way I can is very important to me,” she adds.

Multiple prints of each animal illustration will be sold for £10 each during the exhibition’s four-day run. Other donated prints will also be sold, starting at £3.50.