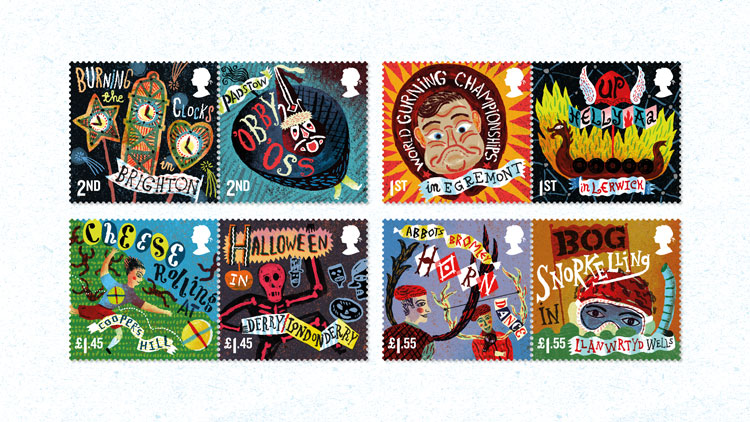 Design studio NB has designed a new collection for Royal Mail which brings attention to the “remarkable renaissance” of community events across the UK.

The set of eight stamps portrays customs such as the World Gurning Championships in Egremont, which dates as far back as 1261, to more recent additions to UK traditions like the Burning the Clocks festival, which was founded in 1993. 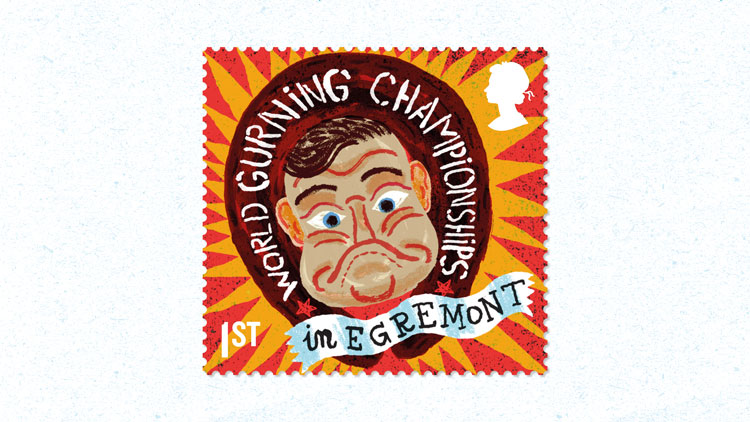 Royal Mail approached NB with a longlist, and the design studio picked eight events which best “captured the spirit of the UK’s customs”.

“We selected the ones with the most energy, which would translate best into a stamp format,” Harriet Payler, a designer from NB says. 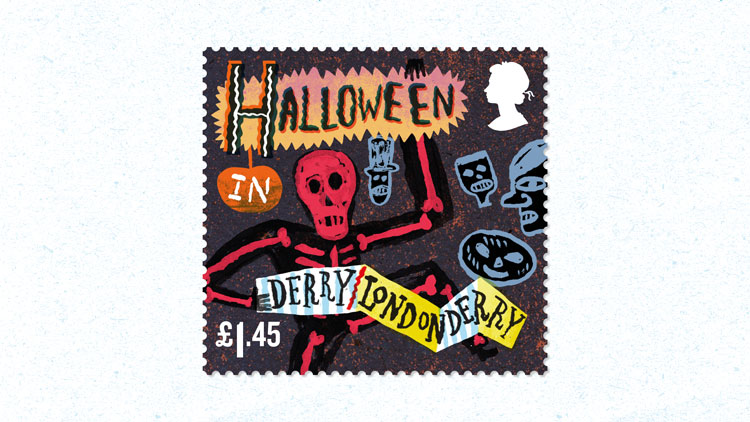 The complete list of customs features ‘Obby ‘Oss from Padstow, Up Helly Aa from Lerwick, the World Gurning Championships from Egremont, cheese rolling from Brockworth, Halloween from Derry, the horn dance from Abbots Bromley, bog snorkelling from Llanwrtyd Wells, and Burning the Clocks from Brighton.

Whether they are hundreds of years old or only a couple of decades, Payler says they are all “borne out of community spirit”. 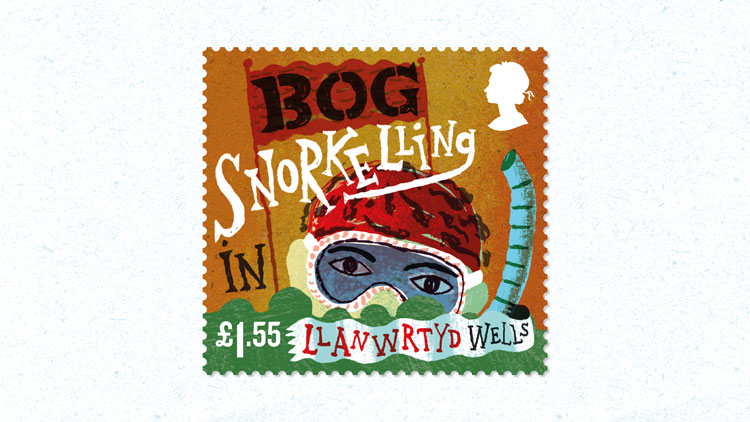 After working out the best ways of conveying the spirit of the customs the studio decided that what was “important was the folk feeling of the events — the tradition, handcrafted costumes”.

“We chose Jonny because his work is so fitting with what we were trying to capture,” Payler says. “It’s unique, recognisable and shows a lot of character.” 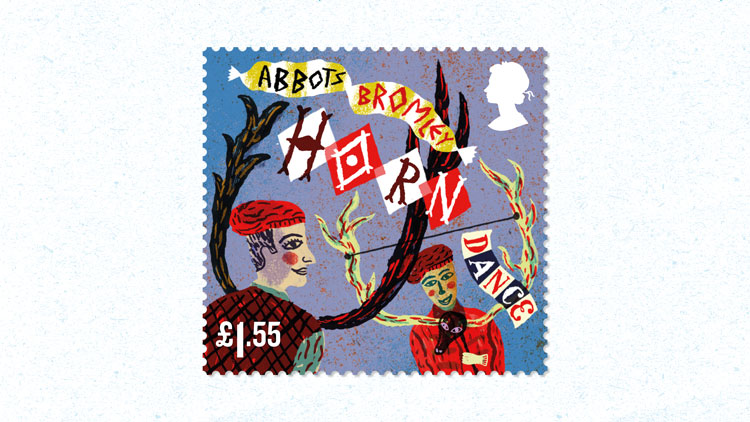 Hannah uses lino and wood cut to create a “textured” look, as a nod to the folk traditions that the stamps depict.

“He gets a lot of texture in there, and it’s handcrafted — almost like a folk project itself,” Payler says. 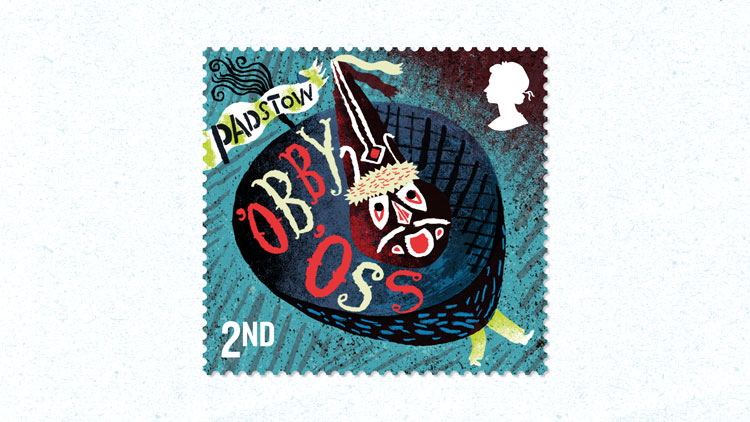 Part of the challenge was to convey the events’ eccentricity into such a small space.

“We wanted to make sure that everything we were capturing was showing off that event and the specific details of each one,” Payler explains. 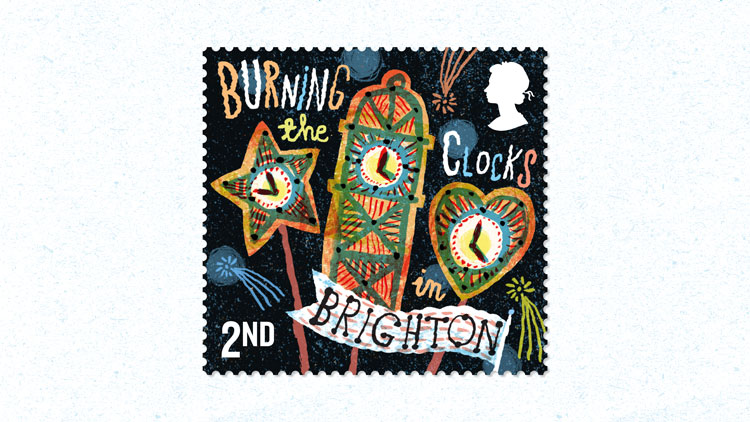 Brighton’s Burning the Clocks festival was founded relatively recently, for example, and people might not be as familiar with the event.

The studio took care to choose visual elements from the lantern procession, including the hand-crafted lights as well as the midnight fireworks.

Colour was also used to make the events come “alive”. 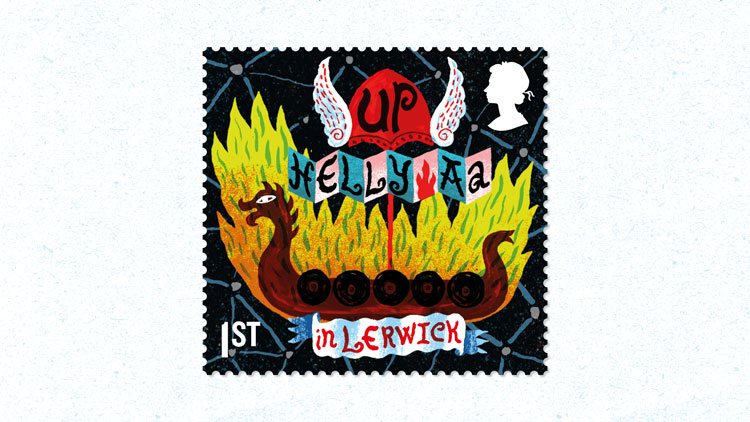 All special edition Royal Mail stamps have a caption, but Nb made this feature a key part of the design.

“Jonny has such a lovely handwriting style so we wanted to bring them into the stamp rather than just put it in a caption to the side,” Payler says.

All of the events’ titles and locations are contained within banners on the stamps. 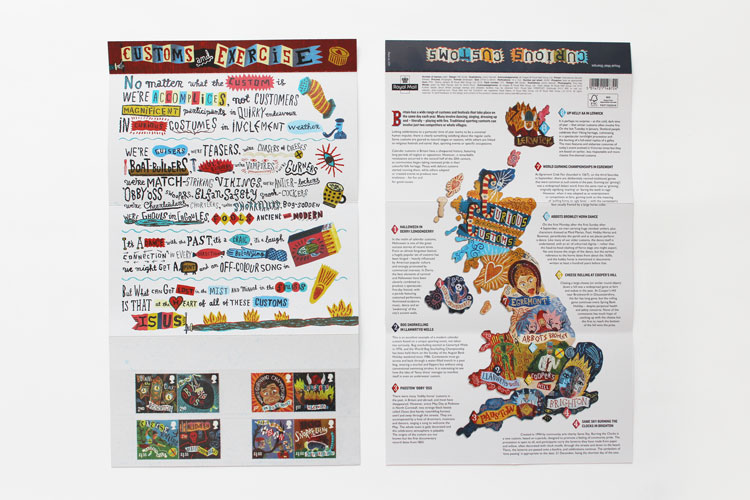 For the collection, Hannah created a laser-cut wooden map of the UK which he then hand painted and illustrated with the points where each event takes place.

NB has set information about the eight traditions around the map, which is included in the presentation pack. 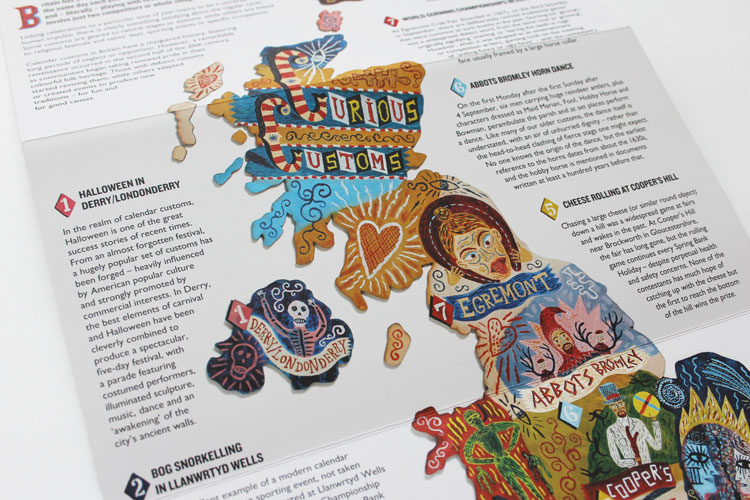 In an effort to “further celebrate the UK customs”, NB commissioned British poet Matt Harvey to write a poem for the other side of the map.

The poem, entitled Customs and Exercise, “celebrates and commemorates” the eight UK customs on the stamps. Hannah has also illustrated Harvey’s poem for the presentation pack.

“Folk songs or poems are a nice way of capturing their spirit,” Payler says.

For the first day cover, Hannah created a woodcut banner with Curious Customs painted on it. It also includes a filler card and a smaller version of the hand painted map.

The two versions of the first day cover feature a different hand stamp, both designed by NB. One depicts a maypole and the other bunting, in keeping with the folk theme. 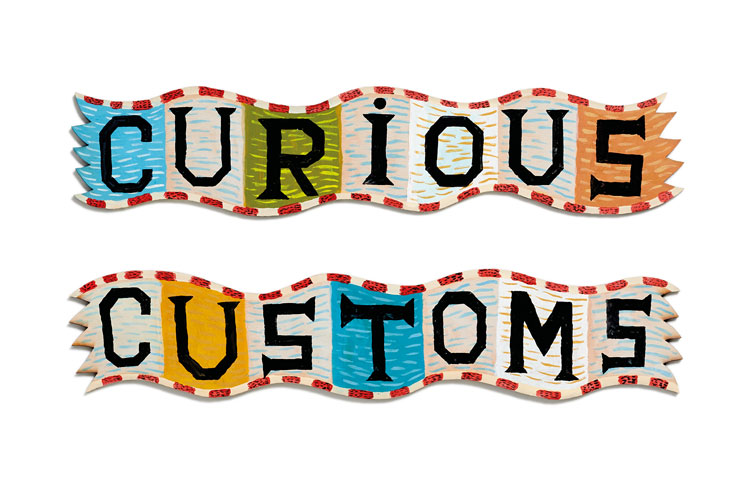 The stamps were released on July 9.

Design Museum at 30: its most important moments from history