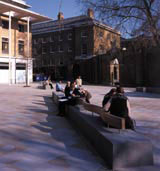 Davies himself also turns his hand to product design. The Meanwhile Gardens is a 1.6ha urban park in west London. The gardens are lit by a series of Corten steel light fixtures, created by Davies. Four pairs of these lights stand 3m high at the gardens’ entrance as a welcoming gesture, while smaller ones illuminate the paths.

Davies believes art should be integrated and should heighten the overall concept of the space, but he is taking this thought one step further. ‘More and more I’m tending to think of space as sculpted, and an art form in itself,’ he says.

After working with the Chelsea Flower Show award winner Christopher Bradley-Hole, Henrietta Courtauld set up her own group three years ago. She focuses on small, modern urban spaces, and has no time for sculpture for the sake of sculpture. ‘Death to the urn,’ she says.

In classical design, sculpture was added to convey a message that was well understood at the time. That role is less relevant now, says Courtauld, as modern design is about simplicity and purity of space. ‘The space works for itself, so you don’t need to adorn it.’

Her clients have been known to demand: ‘Must have a sculpture, must have a water feature’. But that makes a design contrived, and smacks of ticking elements off on a garden shopping list, Courtauld believes. ‘The garden can become a bad museum for an eclectic mix of objects.’

The way round this is to treat the space as a work of sculpture itself, by commandeering the elements that actually form it. So a painted garden wall can look like a modern work of art. ‘That’s more powerful to me.’

Furniture, she believes, is more relevant to modern urban spaces today than sculpture. Clients lack space, so everything put in that space must work hard and have more than one function. She cites the product group Twelve as creating beautiful timber furniture that doubles as sculpture. The designer Alison Crowther also works with natural materials, sculpting wood into benches. Conversely, The Modern Garden Company reproduces indoor design classics in materials for the outdoors – plastics, concrete, rattan and such like. Verner Panton’s Panton Chair, and Jasper Morrison’s Air-Chair are part of its repertoire.

When it comes to conventional sculpture, Courtauld prefers her clients to have some input themselves. ‘I feel uneasy about a designer choosing a piece for a client, as it should be something personal to them.’ A garden must have soul, she adds, and that comes from how the space is ordered and what objects are placed in it. This is very different from tarting up a garden with a bit of product.

Her favourite sculptures are made from natural materials, such as the willow balls by designer Lizzie Fare. ‘What’s amazing about a garden as an art form is that it changes,’ she says.