When BMW unveiled its new corporate identity last week — its first in over 20 years — there was some confusion around its roll out. Marc Mielau, vice president of brand, marketing and customer strategy at the company, tells Design Week that this was in part caused by the outbreak of coronavirus.

The identity, which was developed in collaboration with Munich-based studio BECC Agency, was supposed to be revealed at the annual Geneva International Motor Show. But the 90th edition of the motor show was cancelled this year after a confirmed case of coronavirus in Switzerland, which meant that no event with more than 1,000 people could take place.

As part of the new identity, a two-dimensional “pared back” logo was created for communication purposes only. Mielau stresses that members of the media would have seen the logo everywhere; hanging from the ceiling and on various pieces of collateral. He says that journalists would have understood the company’s intentions for the new logo, as “approaching a new way of communication”.

Instead, there has been a “misinterpretation of what the logo is meant to be”.

Confusion might have been heightened by an image the company produced of the logo on a concept vehicle, the i4. In a three-dimensional setting, against a real car, the possibilities of the newly transparent aspect of the roundel were made clear.

“Obviously it’s something we tested on that car,” Mielau says, but it’s also part of a many-staged process. He adds: “How do you take responsibility such a strong heritage? Steps need to be taken very carefully.” Those steps include considering customers’ opinions and feedback and observing what the media says. “Then we can build our opinion for the future.”

Feedback, like many big brand updates, has been heated. Internet commenters have been negative about the flatter, pared-back logo though some have expressed it looks better on physical applications. “Obviously some people like it, and some people hate it,” Mielau says; he’s just “happy” people are having a conversation it.

He is also philosophical about this kind of criticism, pointing to the introduction of the iDrive system in 2001. The navigation was criticised for being too complicated but is now in use across BMW vehicles (though it has been updated throughout its history). “Sometimes, you need to be brave to make an impact,” he adds.

Becoming an “always on” Netflix-style brand 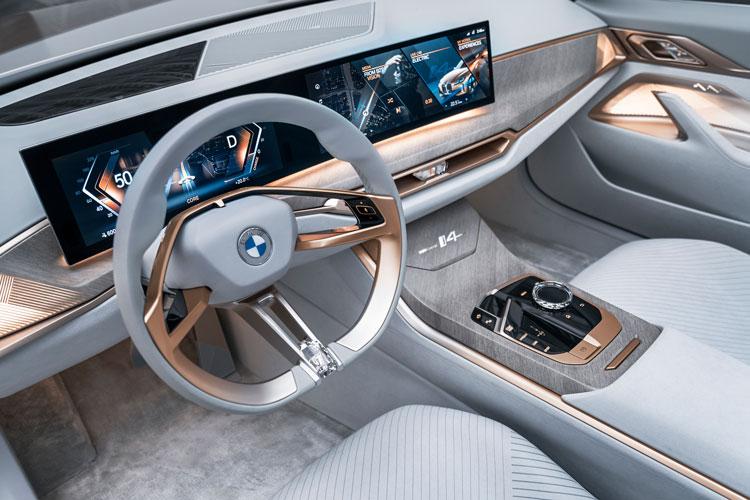 What the logo is being used for — as a new method of communication — is crucial in setting out BMW’s ambition to become a “relationship brand”.

What is a “relationship brand” — and how does a car company transition into being one? It’s driven in part by consumers’ changed lifestyle choices. “We can’t compare with the automotive industry, we need to benchmark with our customers’ lifestyles,” Mielau says, for example, the “effortlessness” of services like Netflix. “We need to be prepared to be the same: seamless and always on.”

This comes into play with direct consumer relations. “With the new identity, we can give much more personalisation than ever before,” he adds.

BMW generates data from how customers use its cars, which allows the company to “predict behaviours” and “anticipate the next steps” — while also “repsecting all privacy laws”, Mielau stresses. He believes it is no longer enough simply to provide a car, “you need to appeal to someone in the purchasing process”. For electric vehicles, this will include introducing a potential customer to the “whole ecosystem” of electric vehicles, from ownership model to charging stations.

The new identity, he hopes, will be able to flex across these expanded requirements. The visual language also aims to “put humans at its heart” but maintain the “car as the star”. “If all those elements come together,” he says, “I think the brand will be very recognisable.”

The new identity is also an attempt to prepare for a more digital future, one where the car brand is not always physically available but “24/7 digitally available”. And Mielau believes that this logo can be “integrated” more easily.

One of the new possibilities of a 2D logo is that it looks better for 3D “executions”. “You can interact with the logo,” Mielau says. “Think about the Instagram-ability of it”. On BMW’s Instagram account, there is a video of the logo with motion visuals behind it.

This more “flexible” approach should help “future-proof” the brand, as well as a “modernise” it. The previous logo, when on materials like business cards, was simply a “stamp”, Mielau says, whereas “the new one integrates itself into the environment — the logo becomes part of the context”.

The logo dominated much of the news about BMW’s new identity. Mielau says that the other key parts include a new typeface and visual language.

The typeface, called BMW Type Next, is “open, edgy and recognises what we stand for”, he says as opposed to the previous, more “traditional” font.

The visual language extends to photography and visuals, which Mielau says will be more people-focused, in keeping with the move towards creating a more personalised brand identity.

While BMW has enjoyed the position of being a status car, it is now seeking new audiences, with new perceptions of what a car should be. The classic BMW customer is a “business athlete”, Mielau says. He defines this as a well-educated person,” who was able to signpost his “status” in society with the car.

In the future, however, Mielau believes that “people want to say more than just: I’ve made it.” The “new generation” of BMW customers is much more “diverse”. It includes “female customers, younger customers, not the archetype business customers”. That will affect the brand’s strategy for the future according to Mielau, though details are currently vague. He simply says that they are “things you haven’t seen and maybe hadn’t even expected from the brand.”

To appeal to these new audiences, the brand also plans to produce more content-based and editorial material in the near future.

Recently BMW announced a collaboration with an esports team, Cloud 9. Esports — competitions based on videogames — tap into an entirely new audience; “we’re literally talking about digital natives”. “Their expectation of cars and mobility is different to business athletes,” he adds.

In October last year, BMW published an article on the 30th anniversary of the fall of the Berlin Wall. It told the story of two friends escaping East Germany in a modified BMW Isetta.

“It was not commercial at all,” Mielau adds. “But it showed an attitude towards the freedom of people.”

Adopting this “attitude” — being in favour of the freedom of people – adds a personal aspect to the brand, which shows “it’s about people”, Mielau says. It ties neatly back to the newly-transparent logo — an attempt to create an identity that is not just more visually open but also more “open-minded”.

What does the Spring Budget 2020 mean for designers?