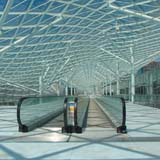 Plans to bring the Milan Furniture Fair to London have been shelved, less than a year after its organisers mooted attending 100% Design and bringing a lighting show to the capital.

Speaking in London last week, Manlio Armellini, managing director of Cosmit, which organises the Saloni, said touring versions of the fair would continue, as last year, to New York and Moscow, with ’emerging markets’ also under consideration. London has been ruled out for the next two years.

The Milan Furniture Fair will take place this year in April at the Rho-Pero complex designed by Massimiliano Fuksas, its new home just outside Milan.

The UK’s capital city was originally chosen as a destination for the fair because of its strong design culture, widely promoted internationally through home-grown events, such as 100% Design and the London Design Festival.

However, a potential clash of interests has been averted from rival organisers.

Ian Rudge, brand director at 100% Design says, ‘We are always looking at exporting our concept, but would only consider markets where there is not currently a good design event.’