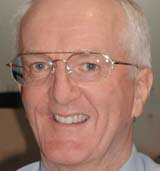 Aubrey Hastings-Smith, production director of Pi Global, died suddenly of a heart attack at the end of last month. After working for a number of advertising agencies, he became a group board director at Michael Peters in the 1980s. He then ran his own print company in the early 1990s, before joining Springpoint in 1993. He went on to spend eight years directing the production team and overseeing all client business at Pi Global.

Aubrey’s wife Susie is organising donations to a nominated charity on his behalf. She can be reached via: vanessa@piglobal.com.

The District appointed to rebrand School for Social Entrepeneurs