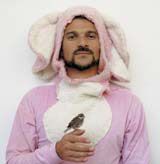 Jaime Hayon tackles everything, from chic bathroom interiors to cult toys, with a playful enthusiasm, rejecting the uniformity that plagues modern design. He takes Max Fraser into his imaginary world

‘Industrial design is going to become fashion.’ Or: ‘We are living in a hybrid world of design, where the traditional meaning of the word is changing. The democracy of design is becoming boring. People want sophisticated things.’ These bold statements are tossed into my interview with the charismatic Spanish designer Jaime Hayon, his rather cheeky laugh softening their impact. But he has reason to be bold. Life is going well for the Barcelona-based 32-year-old, following a jubilant couple of years that have witnessed his name and reputation soar, particularly as a result of the markedly different AQHayon bathroom collection he designed for Artquitect last year.

Hayon was born in Madrid, where he trained as an industrial designer, completing his studies at the École Nationale Supérieure de Création Industrielle in Paris. In 1997, he began working as a researcher at Fabrica, Benetton Group’s communication research centre in Treviso, Italy. One year on, Hayon was appointed head of the design department, where he oversaw the development of interiors for Benetton stores as well as restaurants, logo designs, and exhibitions, while also contributing to the group’s trend 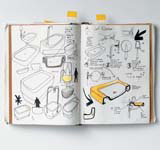 forecasting magazine Colors. During this six-year stint, Hayon spent his spare time developing his own work, principally graphics and drawing. The evident fascination with ‘strange stories and experiences’ in this work goes some way to explaining his move into toys. Arguably, toys is the wrong description for these rather sinister figurines that have emerged as more of a cult phenomenon, boasting strong sales in Asia. Limited edition handmade versions are also sold, such as the graphics-emblazoned collection for a Playlounge and Collette Artoyz exhibition in Paris in 2004.

‘I am fascinated with lost worlds – those of medieval times, circuses and so on,’ admits Hayon. ‘I try to mix the ingredients of these worlds within my work.’ Such an approach spawns projects that teeter on the fine line between art and design, making Hayon hard to categorise. Indeed, as suggested by his opening statements, our pursuit of standardisation and perfection over the past century and a half has arguably made aspects of our visual surroundings uniform. Hayon makes the storytelling characteristic of his work integral to his products, hoping to create a welcome break from such uniformity.

Hayon’s clients aren’t only buying into his design skills – they are investing in his inimitable style. Talking to him, his enthusiasm and the delivery of his ideas are very convincing and undoubtedly played some part in assuring his client, Artquitect, to produce his distinctive bathroom collection.

The AQHayon Collection launched in 2005 and caused a tremor in the bathroom industry and design community at large, with a style that broke from the tried-and-tested-and-copied cycle of recent introductions. The collection embodies the amorphous ‘plasticine baroque’ style which has become his signature, described by him as ‘Mediterranean Digital Baroque.’ Hayon successfully uses both hi-tech production machinery and handmade processes, fulfilling his desire to combine tradition, seamlessly, with technology. In tune with the notion of mass-customisation, consumers are encouraged to mix and match their basins, table supports, mirrors, lamps, towel rails, and hangers from a choice of white, black, yellow, gold, or platinum glazes. More items are being added to the collection this year, including a bath.

Compromise is not a word with which Hayon is comfortable. ‘I have to be happy with everything that I do. I love challenges and am obsessive about quality. The world too easily accepts mediocrity,’ he says. His self-initiated projects are where his weird and wonderful imaginary worlds are explored. Filling endless sketchbooks, exhibition themes come to life comprising such objects as Pinocchio-esque vases, ceramic cacti, plastic toys, and zoomorphic sculptures. In 2003, his first major solo show was brought to life at the David Gill Gallery in London (pictured left). His storytelling talent has been applied to curating, the most recent being a collaboration with the British Council and Experimenta in Lisbon, where he presented his Mon Cirque exhibition.

Hayon’s multi-faceted approach has attracted clients as diverse as Coca-Cola, Fontvella Danone Group, Toy2R, Metalarte, and Adidas. At Salone del Mobile in Milan next month, he will be busy with the release of new bathroom additions for Artquitect, lamps for Metalarte, a massive furniture and accessory collection for Spanish furniture brand BD Barcelona called Showtime, and items for Pallucco under the art direction of Jurgen Bey.