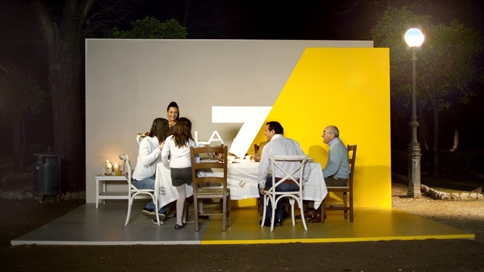 Red Bee Media was briefed to create an on-screen graphic system, seven idents and styling for the channel’s off-air and digital applications.

The channel features a number of live talk shows on culture and politics, so the concept behind the identity was to create an identity that featured real people.

Mawer says, ‘We wanted to create an identity that showed the channel as a venue, which brings people together.’

Red Bee Media created a 3D set that they transported to Italian cities and asked people to interact with. The idents feature people playing football and eating on the set, with the different locations visible in the background.

The on-screen graphics have been designed to resemble the 3D sets. Mawer says, ‘We wanted to weave the venue idea into the fabric of the channel rather than it just being an identity.’