The restaurant, which features sleek dark wood, rattan and bronze interiors by Christian Liaigre and graphics by North Design, is the fifth of the chain to open in London. 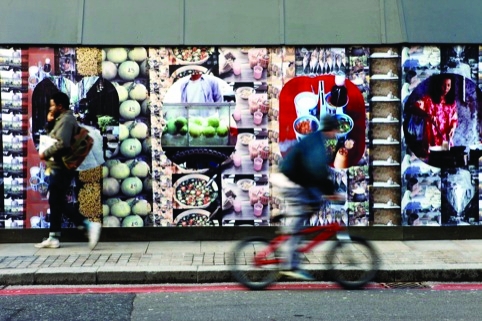 While the building refurbishment was going on, Cure Studio curated a pop-up exhibiton on the surrounding hoardings, introducing new creative work every two weeks or so. Work from photographer Jason Lowe, fashion label Child of the Jago, illustration agency Higginson Hurst, street art magazine VNA Magazine and curated project Big Antidote was on display, as the stylish interiors were being installed.

Lowe was sent to Thailand and commissioned to capture the vibrancy of Thai food then created collages of the tasty foods and curious characters he found. Big Antidote was a take-a-pen-and-pass-it-on collaborative comic strip that resembles a grown-up version of a kid’s party game.

As well as chomping down on Thai delights such as spicy pork and deep-fried morning glory – the vegetable not the Oasis album, visitors that attended the opening last night were treated to a film by Cure Studio and Studio SRK that documented the hoarding project from start to finish. Watch it below.