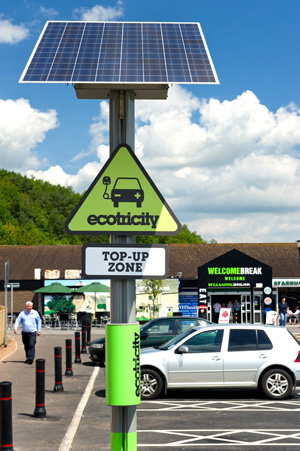 Duttons has worked with Ecotricity for the last two years, initially being appointed to develop the brand. The branding and website design was firstly created in-house, and later developed by Duttons.

This project involved creating graphics for the motorway network of charging points, which will be situated at Welcome Break service stations across England and Scotland.

A Duttons spokeswoman says, ‘We did a lot of development work for the overall identity and look and feel, so that it sat happily as a complementary brand but could also stand on its own – it will be very visible across the country.’

The first charge point featuring the design launched last week in South Mimms, Hertfordshire. It is hoped that 29 charge points will be live by the end of September, and that all Welcome Breaks will have them within 18 months.