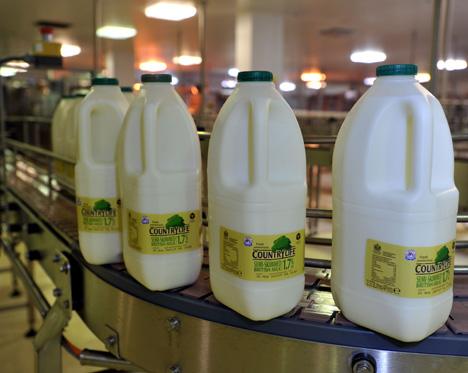 These Infini bottles were designed by Nampak and launched in February this year. Nampak says the design offers an average 15 per cent weight saving across the range, while the handle position of the fully-recyclable high density polyethylene bottle allows it to be easily removed from the fridge.

Nampak says its total production of milk bottles – currently 2 billion per annum – will move to the new lnfini design over the next few years.

Steve Gummer, product designer at Holmes & Marchant, says, ‘The problems they’re trying to solve are food waste and amount of plastic – any step looking at these is going to be good.’

In an initial trial, Dairy Crest launched 30,000 bottles with stickers carrying a number to call if customers were dissatisfied with the new bottle – and it says no complaints were received. The next trials will see nearly one million newly designed bottles delivered to a currently undisclosed major retailer. Over 1.2 million home delivery customers will start receiving the new bottles over the next few months.

Toby Brinsmead, managing director of Dairy Crest’s liquid milk business, says, ‘Developing and introducing the new bottles has required a significant investment but will contribute to the targets we have set ourselves as part of the Milk Environmental Road Map and help reduce our costs. ‘

However, the new designs are markedly less revolutionary than the Jugit bottles, designed by 1HQ, which Dairy Crest launched in 2008.

It was claimed the reusable jug-and-pouch system reduces waste associated with milk bottles and cartons by 75 per cent – a far greater reduction than the 15 per cent the new bottles save.

Though Sainsbury’s said in April 2010 that the designs accounted for one in every ten two-pint semi-skimmed units sold, many consumers were unresponsive to the system, leading to Waitrose’s decision to stop stocking the product in 2010.

Neil Hirst, director of packaging at Seymour Powell design consultancy, says of the Jugit model, ‘I don’t think there was enough visibility – nobody really knows about it. I think the potential inconvenience of it was a barrier to people.’

Gummer agrees. ‘The Jugit concept was good, but consumers’ habits are very hard to break’, he says. ‘The new design is better for them on the cost sheet and cost-saving from a consumer’s point-of-view – both can benefit.’

Hirst adds, ‘You have to ask why they’re reducing it by 15 per cent. Are they doing it to make it cheaper? For the environment? To promote sustainability to consumers? I suspect not – it’s a classic example of sustainability and profitability going hand in hand.

‘Less material is cheaper and better for the environment – as long as it doesn’t inconvenience people then it’s a win-win situation.’