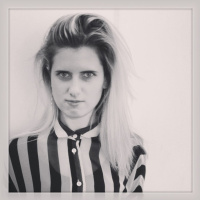 ‘It probably reveals a lot about my formative relationship with the concept of  fun to say that my favourite game growing up was Kid Pix – a bitmap drawing program. Kid Pix combined basic drawing tools with epic early-‘90s sound effects and animations. I’d spend hours glued to the family’s Apple “Colour Classic”, creating rad artistic responses to my milieu. Recurring themes included rollerboots, Pogs and the opening of the Channel Tunnel. Things took a turn for the surreal in 1994 with the launch of Kid Pix 2 and the addition of psychedelic audio inspiration such as “I’m a flying sea otter in a lemonade swimming pool and I love to dance”. My tiny ten-year-old mind was quite literally blown and fun suddenly took on a whole new meaning. From there on out it was an intense downward spiral of Teletext, Gameboys, Tamagotchis, Nokia 3320s, MySpace, Twitter and ultimately brand strategy. Never underestimate the power of bitmap.’

‘I’d love to namecheck some beautiful, genre-stretching game like Flow or Limbo but the truth is, my tastes are crude. The computer game equivalent of a quarter pounder with cheese – there’s nothing I like more than losing myself in Battlefield 3’s multiplayer mode, hiding behind a toilet door in the metro map, shooting people in the head at close range with my M416. Unnecessary violence at its best.’

‘My favorite game of the millisecond is “Dumb Ways to Die” (iTunes top free apps). It’s a really fun finger game but for the right reasons – to teach kids (and adults) safety round the train tracks and was commissioned by Metro trains. So smart and byte-sized.’

‘As the seasons change so does my favourite game. Right now I’d say Mega Man 2 for the NES. It’s like putting on a comfy pair of shoes. The pleasure of an old classic like this is that knowing where things are, you’re able to fly through the game thanks to muscle memory navigating levels on auto pilot. The aesthetics of the game are untouchable; from the limited palette, characters, tight controls right down to the music – listen to Bubbleman’s theme for example http://youtu.be/4JY3xFNcg_g. The design of the game was unique at the time, becoming a series staple and actually predating the mechanic used in the Pokemon phenomena. It uses a rock-paper-scissors elemental weakness versus strength theme. Unless you know the “real” pattern to beat the Robot Masters, you’ll struggle. Back in the day a kid who could beat Mega Man 2 without dying ruled the playground. The final thing I love about the game (and indeed the series) is the box art differences of the East and West. The game was Japanese-made so the art follows the original vision. However for the Western audiences the art changed significantly, best described as a watercolour nightmare looking more like a horrid sci-fi book cover.’

‘After much careful thought and deliberation, I have to say Fifa. It is the only game I actually still play (although somewhat sporadically compared to when I was younger) and still improves so much year to year. Fifa 98 Road to World Cup was a particular highlight. With my team (Crystal Palace) in the top division I had the rare chance of playing as them, plus the fact you could pick your own England squad and the soundtrack was great too. That’s a winner in any 11-year-old boy’s book surely? Even now, the new versions are fantastic.  I guess it’s the attention to detail that really gets me, everything down to the sponsors on the shirts are accounted for.’