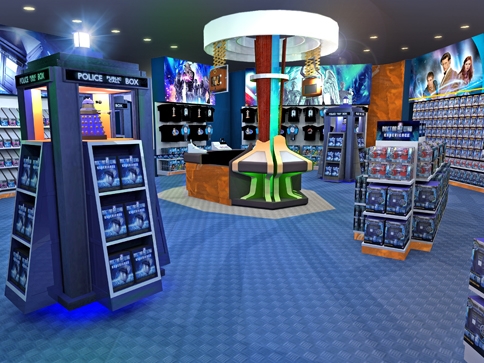 The consultancy was appointed to the project at the end of last year, and began work last month. It says it won a five-way creative pitch, having been approached by the BBC on the strength of a Maybelline store it created in London’s Soho.

Alex Johns, managing director of Brand New, says, ‘It’s a very immersive experience – it’s like walking into a film set with 3D films and Dalek battles. We had to create a shop that would blow people away, so we took the Tardis and took design references from that.’

Brand New has also designed a mobile wi-fi platform that covers the entire experience, allowing visitors to use their smartphones to enhance the ‘immersive browsing experience’ and download promotions.

Johns says, ‘As the store will be there for a year, it has to be multifuctional, beautiful and reskinnable. It has to be on-brand and look as sexy as the rest of the show, but it also has to work very hard.’

He adds, ‘I don’t think we’d have done so well if we hadn’t have had a Whovian [Dr Who fan] in our midst.’