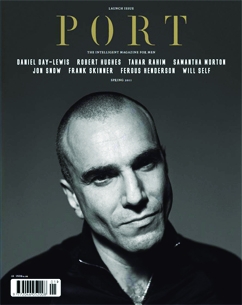 Port has been founded by joint creative directors Willey and Swara and editor Dan Crowe and contributors include Jon Snow, Hanif Kureishi and Fergus Henderson. The first issue is set to launch internationally on 3 March.

Swara says he and Willey have been working on the magazine’s design for about a year. He says, ‘We were wondering why there wasn’t a magazine that looks at style, design and literature and why all men’s magazines looked so similar.’

Swara adds, ‘Matt and I have worked on lots of titles and have lots of references, but we wanted to do something new. Both of us stopped each other from doing things that were too referential.’

The magazine features an Initiations section at the front, which has an interview with Fergus Henderson. This is followed by sections on style and design – Swara says, ‘We wanted to give design and style equal weighting.’

A section at the back of the magazine carries profiles, travel writing and other pieces. The launch issue has an essay by Daniel Day-Lewis about Palestine.

The masthead font – Port 1 – has been drawn by Willey and is used for the Port identity as well as headlines throughout the magazine. Body copy uses the Quadraat font. Swara says, ‘I love big typography, but I was also fearful of using it – I didn’t want it to over-run the magazine.’

An iPad edition of Port, created by Jeremy Leslie, is also set to launch in March in conjuntion with the launch of the print product.

In addition, Swara and Crowe are setting up consultancy DKM Creative, which will work across editorial design, film, books and other areas.