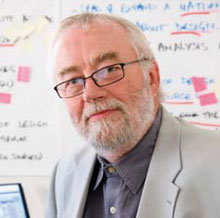 By winning this year’s coveted Prince Philip Designers Prize, Bill Moggridge not only received the accolade he deserves. The honour helped put interaction and service design on an official map so often dominated by industrial and automotive design contenders. Moggridge is himself a product designer by background.

Founder of Moggridge Design in London, then co-founder of seminal Silicon Valley-based global group Ideo, the British-born designer has created the usual array of household goods and industrial artefacts.

Ideo takes interaction to the limits, focusing now as much on the design of systems and services as product. It is compared frequently with management consultancies for its intelligence and influence and has spawned the careers of many great British designers, including Tim Brown, Colin Burns, and Mat Hunter.

Moggridge switched from the West Coast to the East Coast of the USA last year to become director of the Smithsonian Institution’s Cooper-Hewitt National Design Museum in New York.