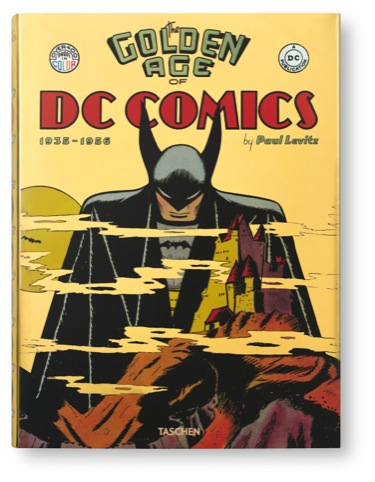 It’s an era spotlighted by Paul Levitz, comic book editor and publisher, who has authored this new Taschen book by taking a forensic look at a time that gave rise to some of fiction’s most loved characters.

There’s no shame in flicking through the 400 pages and gawping at full-page strips, covers, original artwork, and collectibles, but it’s also worth taking note of the stories of the illustrators and creative teams behind them.

In an interview with Joe Kubert, an artist who joined DC’s All-American line, Levitz credits him with ‘illustrating almost every DC character and genre for over seven decades.’

Asked why the Golden Age captured so much ‘magic’ Kubert says, ‘I think one of the reasons is the amount of work each of the artists had to turn out during that time. Because of that they were willing to take chances on composition, storytelling…trying new and different approaches.’

The relationship between writer and artist is examined and there’s an insight into the production of the comics, including illuminating details of the four colour separation printing technique, which many were produced with.

Most revealingly, the formative sketches of Superman have been acquired and we also learn how the likes of Batman, Wonder Woman, Green Lantern, The Flash, Plastic Man, Hawkman, and many forgotten heroes were forged.

The book is part of a series of five books, covering respectively the ‘Silver,’ ‘Bronze,’ ‘Dark,’ and ‘Modern’ ages.

The Golden Age of DC Comics 1935-1956 by Paul Levitz, is published by Taschen, with art direction and design by Josh Baker, priced £34.99