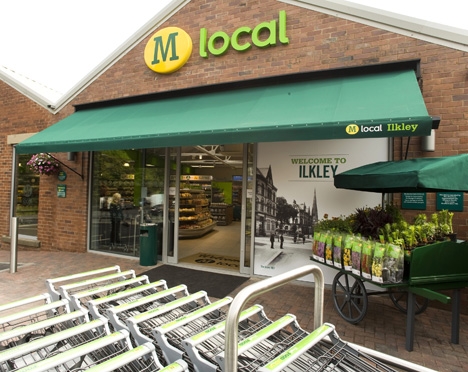 Appointed in October 2010 Fitch was asked to develop a brand that could be positioned as ‘Daily Market Fresh’, rather then supermarket fresh, which Fitch says competitors offer.

The project follows a year of other strategic and retail design projects by Fitch for the Morrisons parent brand.

An M Local proposition has been developed, informed by global analysis of convenience stores in Europe, Asia and North America.

A 914m2 store is opening in Ilkley, West Yorkshire, ahead of two other pilot sites both along the M42 corridor.  By law stores have to be at least 914m2 to be granted Sunday trading hours.

Alasdair Lennox, creative director at Fitch, says the interior of the Ilkley store will look to a marketplace theme, using materials including wood and wicker. The store also has extensive tiling, and walls and beams have been exposed to extenuate a market place feel.

‘Fixtures and fittings are at different levels so you can see what’s behind each of them and there’s a disruption of display gondolas so people are more inclined to browse and be impulsive,’ Lennox adds.

At the front of the store displays will be dictated by the time of day so breakfast, lunch and evening meal products are rotated, with an emphasis on freshness and convenience.

The M Local identity is led by the Landor-designed primary identity using its yellow colour, with the addition of an apple green which is part of the secondary palette.

Communications explaining different products across the store have been written in three new fonts and use a tone of voice ‘which sits underneath the main brand but is softer and doesn’t feel as faceless,’ says Lennox.