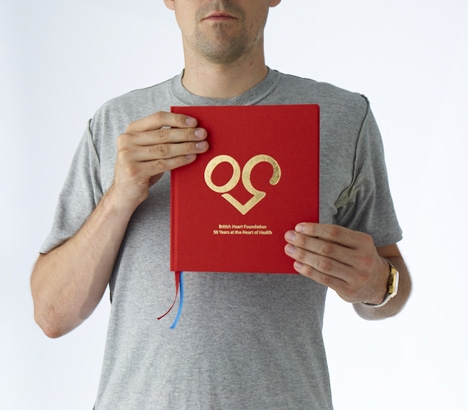 Hat-Trick has created a 200-page book, which contains 50 heart-related facts, while Sennep, working to a separate brief, has created an interactive timeline.

The gold-embossed, limited-edition, hardback book has been designed to weigh 570g, which is the same as the average male or female heart. Hat-Trick creative director Jim Sutherland says the book is aimed at ‘top-level key influencers’, such as MPs.

Sutherland says, ‘The colours alternate on every page, based on blue on the left (de-oxygenated blood) and red on the left (oxygenated). This reflects the blood flowing in and out of the heart itself.’

Sennep has created an online, interactive timeline, which is based around the concept of a concetina paper heart and uses the same content as Hat-Trick’s book.

Sennep partner Stuart Jackson says, ‘Most interactive timelines feel long and linear but as we had so much to say, our challenge was to find a way to display 50 years worth of stories together on one screen.’

He adds, ‘After looking at folding paper to create a concertina, the execution became a paper heart, where every crease represented a story. Looking at the heart users can get a taste of what there is to see before travelling to the section of the paper chain they want to see.’