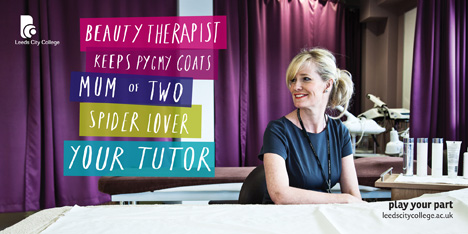 The college aims to establish its in-house design team as a stand-alone unit, with a name still being decided.

The poster designs, which launch on Monday, will be seen across billboards, digital screens, rickshaws, phone box posters and other touch points. The team collaborated with Kong Media on the outdoor campaign.

The team expanded the college’s colour palette to 18 colours, all of which are ‘edible’ to reflect the idea of ‘giving a taste of what we do’, according to Leeds City College creative designer Ross Thompson.

He says, ‘We went along the lines of the Hubba Bubba chewing colours. With the summer campaign, we have to raise brand awareness and public impact every summer.’

The designs arise following the team’s wider strategy to overhaul the college’s visual identity. It is currently overhauling the branding, including the college’s stock photography, photography style, brand guidelines and website.

The refreshed visual identity will appear across college stationery and other collateral over the next few weeks, with the website aiming to launch in the next two months.

What’s in the box?