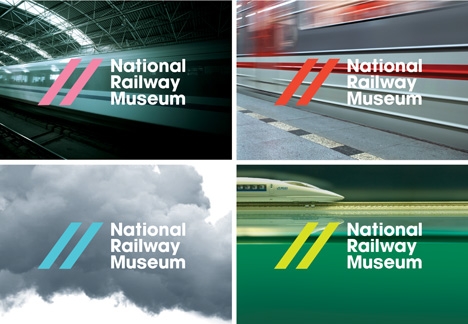 Appointed on credentials through a tender process, the Leeds-based consultancy looked to find a solution that would appeal to frequent visitors and attract new ones.

The museum claims to be the largest railway museum in the world, attracting almost 1 million visitors a year to its York and Shildon sites. It is part of the National Museum of Science & Industry family, which includes the Science Museum.

The new identity, with its marque of two parallel lines, is based on angled slashes found in the iconography and architecture of railway throughout history, according to Thompson Brand Partners managing director Nick Ramshaw.

‘It is synonymous with many forms of railway heritage and it’s inspired by many occasions,’ says Ramshaw.

Ramshaw says the consultancy wanted the identity to suggest ‘speed and momentum’ – something that is indicated through some of the long-exposure brand photography. The museum’s library has been used to source these images.

A complete roll-out will now be implemented over the next year as signage, uniforms, literature and a new website are brought into line with new brand guidelines.