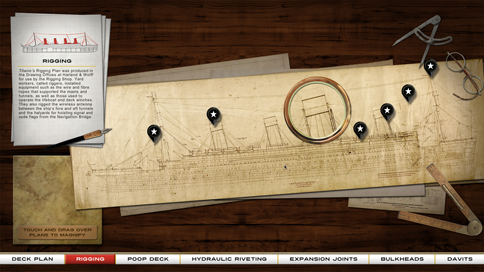 The consultancy was appointed in November 2010 following a three-way creative pitch, and began work on the project in January.

The exhibition, created by Haley Sharpe Exhibition Design, opened on 31 May and the interactives were installed last weekend.

Chris Brown, GRDD designer, says, ‘[The museum] wanted to ensure the Titanic story was intriguing and layered – there are a lot of objects and things to show off and discuss. It’s about engaging with people.’

Brown says, ‘Titanic Stories is all about the objects, so you have to ensure they’re the heroes. The brief said it had to have a table look, so it’s almost like a cabinet, but with no frills.’

Brown adds, ‘The brief wasn’t that strict – they had a certain look and feel but they were happy to leave it to us.’