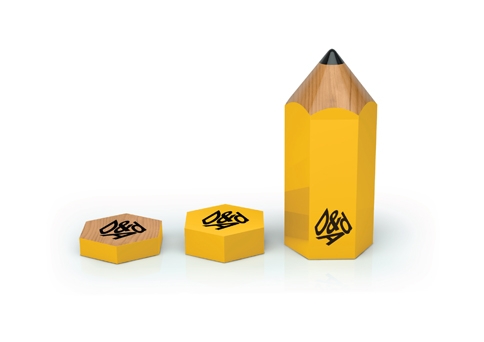 Turner Duckworth founder Bruce Duckworth says, ‘The slices of pencil are relative in relation to size and material of the Yellow Pencil award. They are also exactly the same shape and proportion of the D&AD hexagonal logo. Of course they are made of wood, to be quirky like the pencil itself.’

He adds, ‘The challenge was to create awards that recognise the In Book and Nomination achievements, that have stature and relate to D&AD but are not another pencil, which could dilute the importance of such an iconic award.’

D&AD president Simon Sankarayya says, ‘For many years we have endeavoured to communicate more effectively the value of winning at any level in the D&AD Awards and the slices will undoubtedly help to build awareness of the great level of creativity that it takes to be recognised by our juries.’

The new slices awards will be launched at the D&AD Awards night, which takes place on 16 June at The HAC, Artillery Gardens in London.