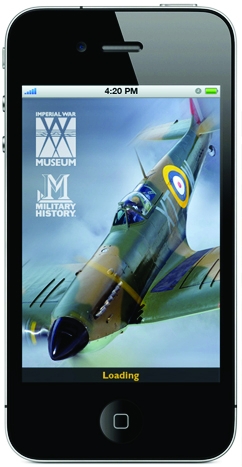 The consultancy was appointed for the work in early 2011 following a creative pitch. It has previously created an interactive exhibition space for the airspace galleries of the Imperial War Museum Duxford, in Cambridge.

Andy Barnes, designer at GR/DD, says, ‘During the day of the shows, the schedule can change – they don’t finalise what happens until about an hour before. The schedule for the app is completely up to date, and you can set an alarm for when things are in the air so you don’t miss what you want to see.’

The app also provides a sitemap, photographic library and aircraft information, and users can create a log of their favourite aircraft to receive a live countdown of when they will fly.

Barnes says that the app uses mainly ‘military colours’ such as dark blue, grey and yellow to reflect the aircrafts’ heritage, and is based on Imperial War Museum brand guidelines.

The app launches this week, and will be initially used for the first show of the year on 22 May.