The consultancy was contacted in June 2011 by Studio A, the US consultancy art directing the stamps, after Studio A art director Antonio Alcalá saw Kapitza’s font release Roto, a picture font of 52  distinct flower illustrations ‘inspired by exploring rotating shapes and clusters’, according to Kapitza. 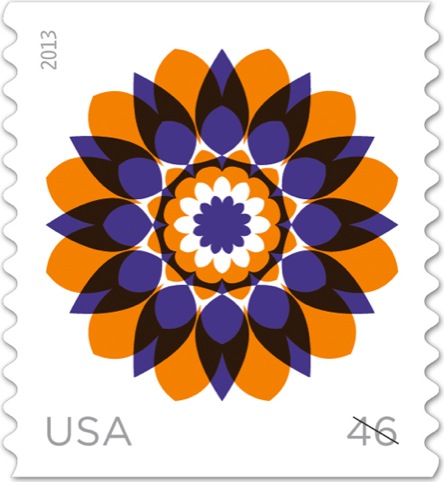 Petra Kapitza, consultancy co-founder, says, ‘We sent out our newsletter with images of the font and illustrations of the elements and Antonio saw it and really like what we’d done with the illustration. I think the blue and red colours looked quite American.’

Kapitza has developed illustrations for a set of four stamps, each featuring the same flower image in a different colour combination –  red and blue, green and purple, orange and  violet, or pink and green.

The contrast of the two colours in each graphic create an illustion that the patterns recede or move forward, lending them their Kaleidoscope Flower name.

Kapitza says, ‘The brief was to create something that resembles a flower but was also quite abstract, so it looks quite digital.’

She adds, ‘We were commissioned just to create one flower but we went on to create a whole series of them. We worked with Antonio to create the colour variations but they have to be quite contrary to create the same effect as the blue and the red.’

The stamps can be preordered now in the US and will become available in January.

A flexible identity for the Pure London fashion show