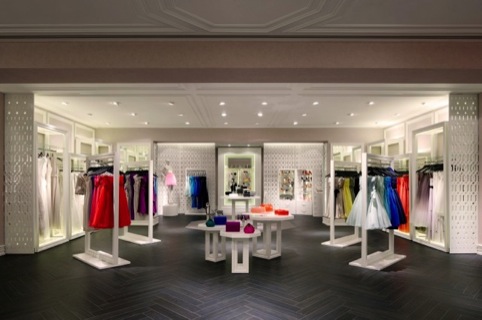 The designer has already worked on a series of Coast concessions for House of Fraser and Bloomingdale in the US.

According to Broom these allowed Coast ‘to get their feet wet’ and ‘begin to reinvent the brand’ before he was approached in September to create ‘an elevated version.’

‘From an operational point of view’ Coast was looking ‘for a nice flow around the store, so it felt easy to shop, and an emphasis on the fitting rooms,’ says Broom.

He adds, ‘Often fitting rooms are small, or an afterthought. In the basement we have designed around the fitting rooms.’

Working to the £1m budget, Broom has looked to translate the brand’s ethos of ‘timeless elegant looks’ into the design of the 6000m2 space.

Signature pieces from Broom’s collections have been integrated, including his Decanterlights which are adapted to feature silver fittings rather then gold.

Dusky pinks with white and soft greys form a colour palette which has been applied to furniture including armchairs, upholstered in bespoke materials.

Architraving detail has been applied throughout the store to walls and fixtures ‘but in a modernised way,’ says Broom.

There is an emphasis on frames throughout the store, with two large illuminated frames at the entrance for customers to walk through, leading to a lit marble staircase which gives way to oversized mirrored panels that frame the collection and illuminate the space.

Broom says he has looked to create ‘a high-street version of the high end stores of Bond Street or Mayfair’.