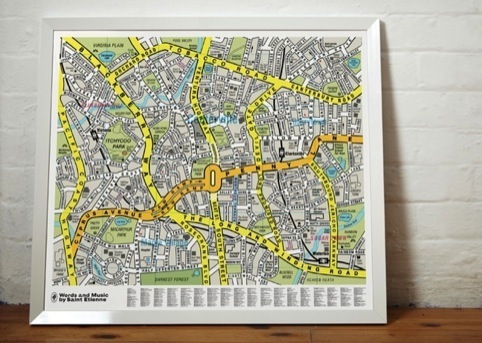 The original Song Map print was created as a road map made up from 390 song titles (Highway to Hell, Itchycoo Park, etc.)

Enamoured with the project, Saint Etienne co-founder Bob Stanley got in touch with Dorothy to ask if they could created an updated map for the band, using song titles selected by Stanley, and with a layout based on the decidedly unglamourous streets of Croydon, where the band grew up. 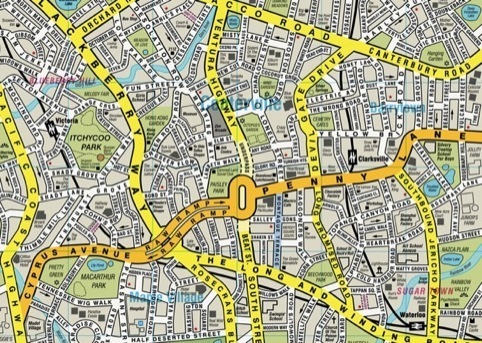 Stanley says, ‘Whenever I walk down the street I have a song in my head. And plenty of songs have a visual counterpoint, a snapshot in my mind…

‘These images – street corners, alleyways, bus-stops, shop-fronts – are all attached to specific songs in my mind, like some odd version of synaesthesia. The song map is as close to a visual version as we can get.’

Dorothy describes the map – which features titles like Cyprus Avenue, Maggie’s Farm and The Long and Winding Road, as ‘reading like the record collection we wish we had’.

Words and Music by Saint Etienne is released by Universal this week, and a print of the Saint Etienne Song Map will be available from www.wearedorothy.com/buy from 22 May.