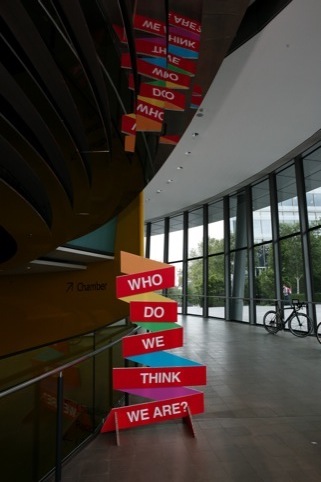 Delegates including Sebastian Conran, Business Secretary Vince Cable and Jaguar design director Ian Callum attempted to define the specific UK qualities and their impact on design and the economy. Inventiveness, openness, a love of drinking and bad teeth all got a mention…

The Summit – running at a time of particular national fervour driven by the Jubilee/Olympics – was largely a bid by the Design Council to highlight and promote design’s potential to drive the economy, suggesting that this role might be underappreciated by the wider public (indeed, one of the national characteristics noted in the summit was a lack of pride and confidence).

An Ipsos MORI poll commissioned by the Design Council in advance of the summit showed that less than half of those surveyed identified the Dyson vacuum cleaner as a product designed in Britain, while only 13 per cent identified the World Wide Web as being British-designed.

Cable says, ‘British designers from Brunel and Berners-Lee to James Dyson and Vivienne Westwood have been admired around the world for generations. They have all contributed substantially not only to Britain’s reputation as an innovative, inventive nation but also to our economic growth.

‘We should be proud of our creative industries and how they have meshed with technology and engineering to produce products that Britain and the rest of the world wants to buy.’

So what were the national characteristics identified at the summit, and how could they be used?

The good news first. Our national characteristics include ‘bravery’ (according to Callum), ‘openness to ideas, people and investment’ (Cable) and has ‘a great education system, which teaches you to think laterally (lastminute.com co-founder Brent Hoberman).

Sebastian Conran attempted to define what our national design characteristics might be, in the context of how we regard other countries’ design scenes.

‘German design is self-controlled. Japanese, for example, hard-working and focused on technology, all with a touch of zen. If we think of Italian we think of Ferrari and Vespa. Scandinavian design is playful for a middle class, French design is novel and chic.

‘British design is inventive and elegant, thriving on disruptive and lateral thinking.’

Cable pointed out that as well as design ‘Britain is very good at making things.’ The share of manufacturing in our economy is about the same as France and Germany he says, while Ipsos MORI’s Ben Page noted that we are in the world’s top-ten manufacturers.

‘Britian is good at making things – we are more than a series of anecdotes about good design,’ says Cable.

The bad news? According to Page the things we are least proud of are intolerance, bad eating (and drinking) habits, being too pessimistic and nationalistic and having bad teeth…

Confused.com and Buddi founder Sara Murray also brought up a lack of confidence, saying, ‘I am a great believer of “home-grown”, but American companies are more keen to take an idea and take it to market, whereas in the UK there are always 50 reasons why not to start.’

Murray also questioned how the Government was going to promote Made in Britain through procurement, with Cable admitting ‘Procurement has not been approached strategically and has been overcautious around EU regulations… We don’t need to be protectionist but we can engage with UK suppliers. I think there will be a general trend towards UK suppliers if they can compete on price and quality.’

And the conclusions? There was a strong drive from Design Council chief executive David Kester for more Government engagement and support of design. He says, ‘Is it useful having Government support? There is sometimes a feeling of “let business get on with it”, but Government support is vital to business such as the Sugru brand and I think we need to be better at recognising the breadth of what these programmes do.’

Many panellists picked up individual issues – procurement, difficulties in securing visas for potential employees, flaws in the education system and a lack of designers on the boards of major businesses  – as points that need to be solved.

Meanwhile a Design Commission report on design in the public sector, launching later this year, will examine issues around Government engagement with design.

And a comment from the audience summed up some of the flaws with trying to define our national characteristics, while also proving design’s role in helping the economy, ‘Painting our country as a Cotswold image isn’t doing us any favours, when we are facing new challenges with a need to be innovative, if we think we can rest on our past laurels we are very much mistaken.’

The Graduation Guide for Design Students