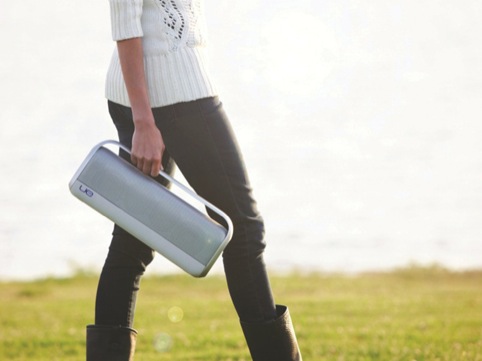 UE Boombox, for Ultimate Ears by Logitech, by Design Partners

Ultimate Ears was established as a manufacturer of ‘in-ear monitors’ for professional musicians, before branching out into the consumer market. The UE Boombox aims to integrate Bluetooth technology with advanced speaker design. The design is symmetrical, with no front or back, creating a 360º portable design.

The iPad Mini is 23 per cent thinner and 53 per cent lighter than the third-generation iPad. It features a 7.9” multi-touch display, two cameras and ultrafast wireless. Apple says the iPad Mini is ‘every inch an iPad, yet in a revolutionary design you can hold in one hand’.

Libratone Zipp is a minimalist, cylindrical, portable speaker, designed with Scandinavian heritage in mind. Users can stream music directly from an iPad, iPhone, desktop computer or other device. The Zipp is wrapped in fine, changeable Italian wool, available in eight colours, while specially designed drivers disperse music in all directions for a 360º sound experience.