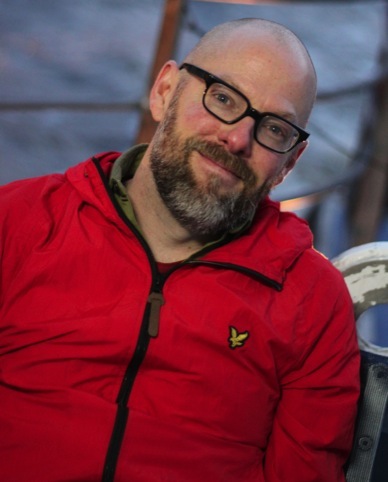 When I was working on a comic strip for my high school newspaper. I took to working with Letratone and Letraset to compose graphics much more readily than I previously had taken to drawing. I didn’t really get that there was a thing called ‘design’ until a teacher pointed out to me that I seemed to have a knack for it.

My first design-related job was working as an assistant for Boston University’s alumni magazine Bostonia, while simultaneously designing the school’s 180-page yearbook. This was just before the Mac became a standard production tool, so I was drawing layout grids in non-photo blue pencil, specing type, pasting down galleys, and patching spelling mistakes with an X-acto and some hot wax. A lot of my sensitivity to letter-spacing comes directly from that very intense summer.

As a type director, I spend a lot of time talking to art directors and designers about how to choose typefaces well for the work they’re doing, and helping the other type designers I work with figure out how best to respond to the briefs we get for custom type projects. I also spend a lot of my time doing research about Monotype’s history, so I can help people see the connection between what the company’s accomplished throughout the last century to the things we do today.

I’ve seen two waves of people learning how to be their own typesetters: first with the spread of desktop publishing with Pagemaker and Quark, and now with web designers and developers learning how to deal with the broader palette of type available with Web fonts. In both situations, I’ve seen a lot of growing pains as designers figure out how to manipulate the details of things they had taken for granted previously, but then figure out how much possibility there is in working directly with the ‘raw materials’ of the medium.

What is your favourite project that you’ve worked on?

In all honestly, my favourite projects have always been ‘zines that I’ve published on the side. Aside from being a chance to cut loose and be informal, they’ve been the best place to work out my own visual aesthetics before risking other people’s money on my ideas. Publishing something is also a great way to collaborate on fun stuff with people I admire.

What is your favourite project that you haven’t worked on?

Two good friends of mine who used to work at Monotype – Alice Savoie and Patrick Giasson – worked on a set of beautiful, fun typefaces for the Cartoon Network that are so exuberant and pretty they almost bring a tear to my eye.

At one point when I was in a long creative and professional rut, I went to grad school for a further degree in graphic design. In the end it was a pretty expensive way to find out that I was a pretty good designer who was just frustrated with a lot of what was being expected of a graphic designer as things changed in the field. A few years afterward, when I took a leap into typeface design, I realised I should have started designing typefaces years earlier. I would have been a lot less confused about what I wanted to do.

My ambitions are not that great. I would like to finish a typeface that I’m really proud of, that will get used to make things that are more exciting than I could have imagined doing with it. But maybe that’s a great ambition after all?

I’ve had the good fortune of working with a lot of inspirational people, and it’s hard not to provide a list. Lately, I’ve been regularly reminded how much there is to admire about Robin Nicholas, who has spent almost 50 years working on type at Monotype, developing a keen eye and being the most gracious person I’ve ever encountered.

Don’t think a typeface can do all the work. Explore and experiment and figure out how to get the most out of the type that you use.