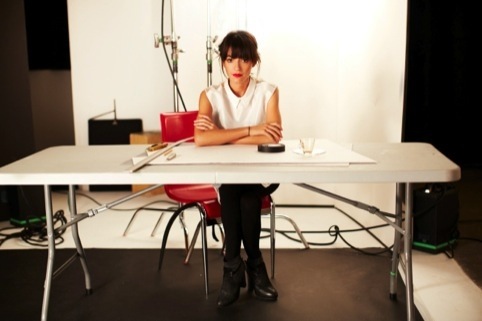 One was that Walsh, a Rhode Island School of Design graduate, was only 24 years old. The second was that the announcement of the partnership was accompanied by a picture of her and Sagmeister stark naked.

When Sagmeister launched his studio 20 years ago, he sent out a card, depicting himself in the buff. Thus, when Walsh joined, he sent out an updated version showing them both sans-clothing.

Stunts like this make the topic of her talk at the Adobe MAX conference, playfulness in innovation, rather apt.

‘I’m a player’, she announces, opening the talk. ‘I know what some of you with dirty minds are thinking. But I’m not going to spend the next hour talking about my sex life.’

While it’s slightly irritating that much of her talk seems to play on the fact she’s an attractive young woman – she makes no bones about exploiting her sexuality for added emphasis (‘if you have a message you want to get out really fast I’d highly recommend getting naked’, she grins) – she goes on to deliver a lively, engaging presentation on how creativity is enhanced by play, experimentation and not being afraid to fail.

She says, ‘I love to play in my work. As a creative see my work as play not as a job. The more fun that went into creating my work the better it was received.

‘Play is a state of mind where we feel creative, focused or alive.’

Walsh’s design career, she tells us, started at the age of 12, when ‘instead of rollerblading or going to the movies I learnt  HTML and CSS.’

She developed a website for her Tamagotchi virtual pet, and began creating online tutorials to help others do the same. Before long, she was averaging 15,000 unique users a day, and began reaping the rewards in the form of large Google ad cheques.

She went on to art school, studying at Rhode Island School of Design, in a move that terrified her parents.

‘They thought I was going to become a pot head or a starving artist’, she laughs. ‘And I did’.

After graduating Walsh worked at Pentagra and Print and iD magazines. Now as Sagmeister’s business partner at Sagmeister & Walsh, the playfulness that was catalysed by the freedom of her RISD education is being put to good use.

For a 2010 Levi’s campaign, for instance, the consultancy was presented with an entirely open brief to promote the brand’s ‘we are all workers’ positioning. They created a huge billboard formed of cogs, which turned throughout the day to eventually spell out the strapline. Which all went well until a spanner – or more accurately, a bird – flew into the works. The piece  is now on display in the Louvre Museum in Paris, where visitors can turn the cogs themselves.

Experimenting with typography forms a large part of much of the studio’s output. Walsh shows some beautiful work for PUBLIC bikes, which uses  4,209 bike chain links to form the logo.

‘I love ideas’, she explains. ‘Idea generation most playful part of the design process – but it’s usually 5 per cent idea generation and 95 per cent about persuading the client to go with it.’

While a mind as sharp and creative as Walsh’s can thrive with an entirely open brief, Walsh echoes the sentiments of many of the other MAX speakers that limitations and constraints can in fact help the best ideas to emerge.

She says, ‘You’d think having no constraints would be a dream, but it’s harder to come up with a solution with no rules. When I have limitations it makes my work better – I make own rules and constraints to guide me to a concept.’

Walsh ends on a well-worn quote that’s oft-heard for a reason. ‘Do what you love and you’ll never work a day in your life’, she says. And seeing the joy she clearly gets from her own work, it seems she’s the ultimate poster girl for such a maxim.

A new identity for Crystal Palace

Tom Inns to head up Glasgow School of Art

A new identity for Crystal Palace