‘The road of excess leads to the palace of wisdom’, quipped Romantic poet William Blake, in his book The Marriage of Heaven and Hell.

This ideology was clearly one shared by the four Hellraisers Richard Burton, Richard Harris, Oliver Reed and Peter O’Toole, who have now been immortalised in all their devil-may-care glory in a graphic novel published today, Hellraisers: A Graphic Biography. 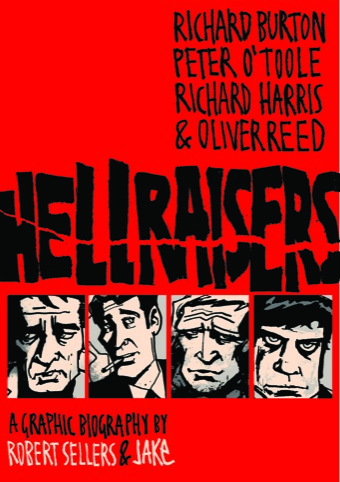 Robert Sellers says, ‘The aim of the graphic novel was clear, to produce an unapologetic celebration of the booze soaked and the damned in our sanctimonious ‘Oprah’ age of public confession and easy redemption.’

Starting off the adventures with a Christmas scene, we find a character named Martin  sat alone in a bar drowning his sorrows. 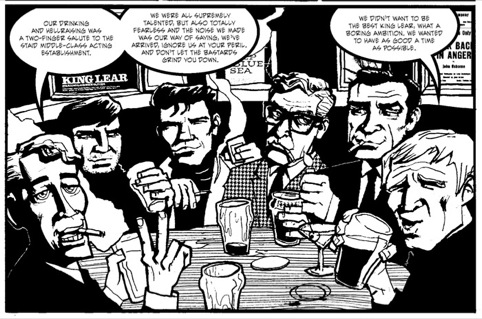 The four Hellraisers take it upon themselves to join him, each in turn delineating their lives to Martin and providing four parable-like cautionary tales.

JAKe says, ‘I spent a lot of time studying footage of each actor to mimic their movements and expressions, so I could get them to ‘act’ their dialogue. But, like being drunk, there’s a mixture of realism and exaggeration in there.

‘My aim was to make the comic rocket along at pace with a very graphic, booze-sodden tone, which lurches from funny to  surreal to absurd to tragic.’

Hellraisers: A Graphic Biography, is published today by Self Made Hero, priced £14.99