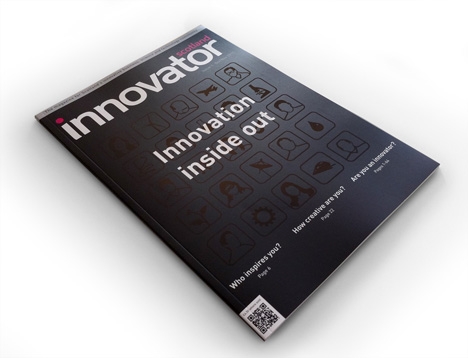 Glidden was appointed to the project about six months ago due to an existing relationship with one of the publishers.

It designed the masthead and was responsible for all editorial design. Each issue will have a ‘feature colour’, with issue one using magenta throughout the cover and the magazine interior spreads.

Andrew Glidden, founder of Glidden Design says, ‘We wanted the look and feel to be in alignment with the idea of innovation – it wouldn’t have been right to produce another business-looking magazine.

‘We wanted a clear, creative appearance without the design overpowering the content. Photography is very important, so we had to balance the striking images with the content.’

The magazine’s first issue features a predominantly black matt laminated cover with icons of innovators and innovations picked out in a gloss spot UV varnish, aiming to ‘create a subtle yet impactful innovative effect’.

The word ‘innovator’ is depicted in lower case, aiming to reflect the magazine’s policy of telling the stories of the people, rather than the technology of the innovations.

Glidden says, ‘It’s all lower case so it’s not shouting at you. It’s meant to represent something confident but personable and friendly in appearance.’