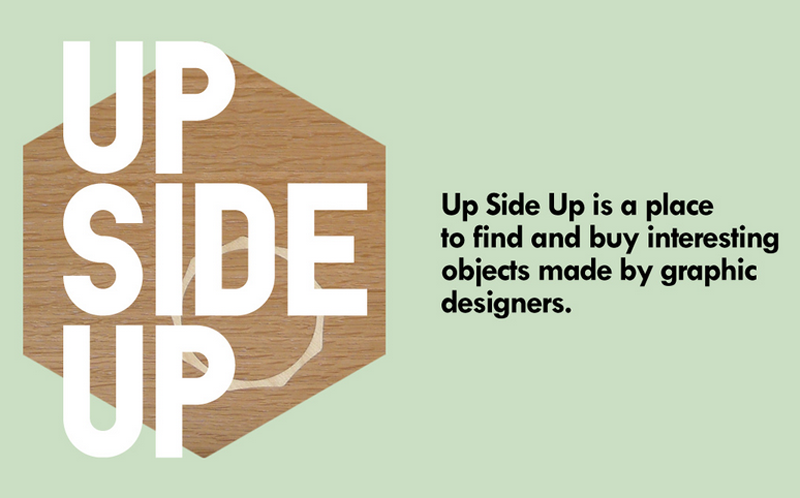 The designers, who are all graphic designers, we stress – not product designers – work with craftspeople and manufacturers to produce prototypes of their ideas.

Up Side Up founder Angharad Lewis, ‘Graphic designers often get to develop ideas and work in context with materials as part of research but don’t get to see these things become products.’

By working with Up Side Up, graphic designers and illustrators can forge relationships with makers and manufacturers – or seek out their own.

Prototypes can then be worked up, allowing the designers tap into the Up Side Up demand-based system – a bit like Kickstarter – so that limited runs of products can be developed when there are enough orders in place to pay for them.

In essence investment from buyers takes the idea from prototype to finished edition. All the objects on the site are produced exclusively for Up Side Up in limited, numbered editions.

Up Side Up says, ‘The investors in an Upside Up object receive a beautiful, functional and collectable piece of design, while becoming part of the object’s story.’

The story behind each object is also documented at www.upsideup.co.uk which reveals the inspiration behind each designer’s idea and how the collaboration with makers has brought the product to life.

Consultancy A Practice for Everyday Life was inspired by Bethnal Green, East London-based café E.Pellicci’s in its design of a handmade serving tray, with a trompe l’oeil marquetry top depicting drink spills and cup-rings.

The café, which was established in 1900 is known for its marquetry detailing which covers the interior from floor to ceiling.

In a further connection APFEL’s own studio is a converted marquetry factory in Bethnal Green.

The Pellicci Tray will be produced in an edition of 25, with the body of the tray handmade by London-based cabinet maker Daniel Bradley and the marquetry surface laser-cut and hand assembled by ACE Marquetry, Wiltshire. It is priced at £210 and made of oak, birch and mahogany.

A second project on the site, Stacked Bowls by designer Ben Branagan and illustrator/ceramicist Laura Carlin is a set of three earthenware vessels.

Each bowl has a particular function, which has defined its shape and size. They stack together to form a totemic anthropomorphic shape. The set of three costs £119 for an edition of 40.