The £15.6 million gallery is dedicated to the development of information and communication technologies and is being opened officially by HRH the Queen this afternoon ahead of the public opening tomorrow.

It is the first gallery of its kind according to the Science Museum and covers everything from the transatlantic telegraph cable (laid in the mid-19th century) that connected Europe and North America in minutes rather than weeks, to the computing power of the modern smartphone.

There are more than 800 objects in the 2500m² gallery; the largest in the museum. Together the objects have been curated to “help us understand the connected world we live in today”, the museum says.

The world of communication is navigated by six networks, which are also divisible themes across the gallery: the telegraph; the telephone, radio and television broadcasting; satellite communications; computer networks; and mobile communications.

“The story-box will help direct visitors around key objects, exhibits and moments in the gallery,” says Universal, which has also created an elevated elliptical walkway “to contrast with the existing orthogonal structure of the gallery.”

Interactive displays illustrate the personal stories of those whose lives were changed by each new wave of technology.

Animated displays, interactive screens, large-scale graphics, projections, interactive games and audio are all part of Universal’s integrated design solution, which it says “brings the complex stories to life in a simple, engaging way.”

Universal collaborated with Bibliothèque on interpretation and exhibition graphics.

The gallery’s centre piece is a 6-metre high aerial tuning inductor from Rugby Radio Station, which has been donated by BT. It is made of copper and wood, and was once part of the most powerful radio transmitters in the world.

It has also commissioned artist Rafael Lozano-Hemmer to create a unique digital art work for the gallery.  Fiducial Voice Beacons is a “dynamic light and sound installation” designed for all visitors to interact with, the museum says. 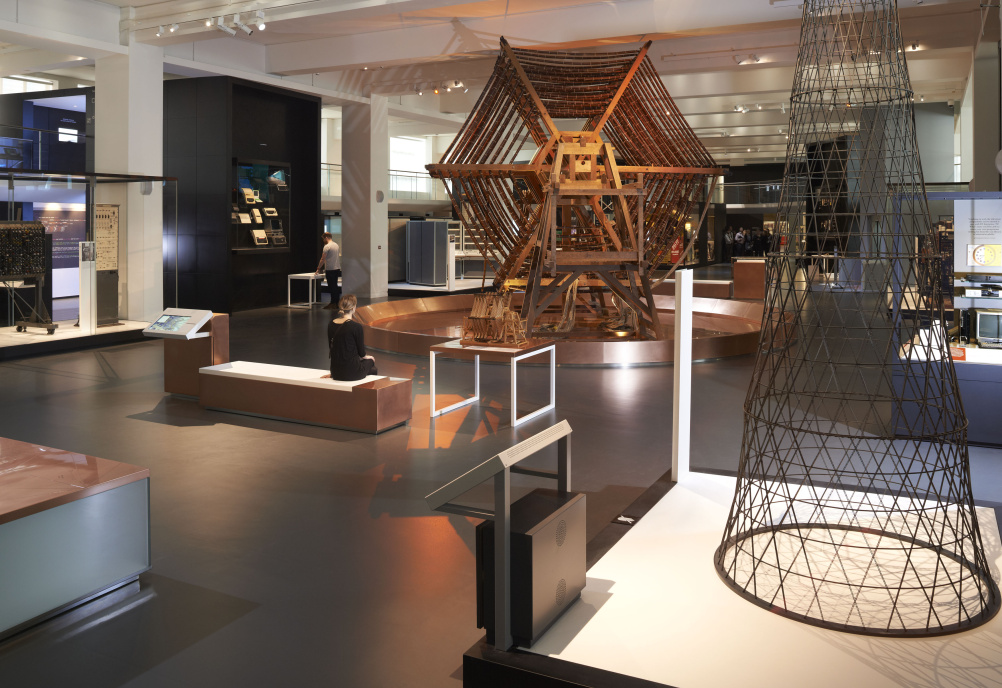 The piece sees 40interactive light beacons installed on the ceiling of the gallery. Each beacon “holds” a sound recording which is represented by glimmering beams of light that gently illuminate the gallery.

The recordings are the voices of pioneers of modern communication who have influenced our understanding of information technologies, as well as poets, scientists, artists and philosophers.

Visitors access the recordings by using a free app featuring an augmented reality map of the gallery, which allows them to interact with the piece.

The Queen has already removed a glove to send her first tweet from the gallery via the @BritishMonarchy account. It read: “It is a pleasure to open the Information Age exhibition today at the @ScienceMuseum and I hope people will enjoy visiting.  Elizabeth R.”

Design education – the view from colleges

The Connaught launches new identity based around bespoke artwork