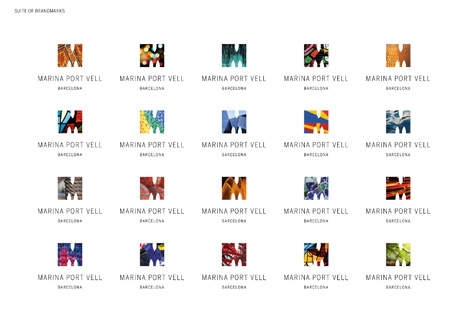 The identity is based around an aperture-shaped ‘M’, which Aesop creative director Martin Grimer says is ‘a playful nod to boat shapes entering the marina’.

The ‘M’ symbol can be filled with different images reminiscent of Barcelona.

Grimer says, ‘Colourful and able to tell many stories, the visual idenity is made up of 20 “M” logos that are interchangeable. Specially commissioned photography ensures a powerful and unique image collection to, again, build on the richness of the identity.’

Roger Hart, chief executive of Aesop, says, ‘We spent a couple of months immersing ourselves in the superyacht world – interviewing captains, crew, industry experts and the like – to understand the market and we subsequently created the strategy and positioning of “the best home port in the Med”.’

Aesop was appointed to the work by the Salamanca Group following its acquisition of Marina Port Vell in July 2010.

Ahead of the identity design work, Aesop was briefed to carry out market and audience research. It is also working on the roll-out of the brand, starting with its unveiling at the Monaco Yacht Show this week.