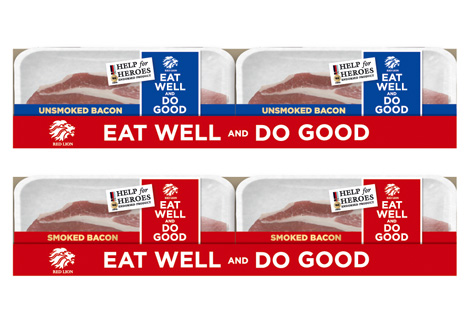 Red Lion produces a broad range of food products and gives all of its post-tax profits to armed forces charities.

Appointed in January, Dragon Rouge was approached by the company after comments the consultancy made in the Press, reviewing the brand and how it could improve.

Dragon Rouge managing director of consumer brands Kate Waddell says, ‘What the brand needed is to win the hearts and minds of the consumer.’ She says she felt the previous look was ‘slightly recessive.’

New packaging has been developed to guidelines which direct that taste and quality must be communicated, according to the consultancy.

Dragon Rouge says the new Eat Well and Do Good line will work to communicate food standards and charity donations made by the company. The consultancy adds that it is a reference to the Keep Calm and Carry On WW2 Government campaign.

Waddell says that Keep Calm and Carry On imagery has great ‘public affection’ and is a ‘front of mind image which semiotically is doing a good job at the moment’.

The new Red Lion brand will therefore be ‘emotive and easily recognised,’ she adds.

The designs will be rolled out nationally across the entire suite of Red Lion products next year.