It’s something of a peculiarity that of the four ‘landmark projects’ hyped in this year’s London Design Festival, three are by architects. 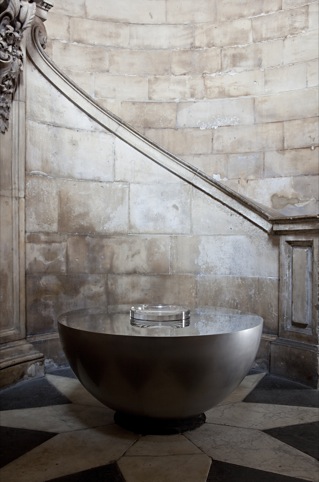 David Chipperfield’s Two Lines structure is taking shape on the Southbank, the Timber Weave installation by Amanda Levete (wife of LDF director Ben Evans) sits outside the Victoria & Albert Museum and John Pawson’s Perspectives piece has been installed in a little-visited starwell in St Paul’s Cathedral.

Only the Bouroullec Brothers, with their Textile Field at the V&A, are keeping the design flag flying. 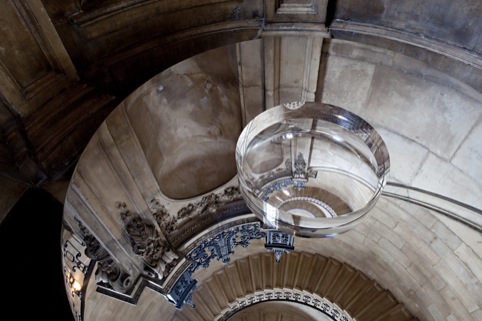 While this sort of commissioning might seem rather biased towards architecture (a discipline that’s hardly short of press and exposure) it has also resulted – in the case of Pawson’s Perspectives – in a profoundly beautiful piece of design.

It could even be argued that only an architect could be capable of marshalling the respect for context and attention to detail that Pawson shows in the Geometric staircase at St Paul’s.

As you’d expect from arch-minimalist Pawson, Perspectives is a subtle, respectful and effective intervention into Sir Christopher Wren’s staircase.

At the foot of the stairwell sits a meniscus – the largest lens possible to manufacture, according to Pawson and project partner Swarovski. This sits on a large mirror, while at the top of the stairs – some 23m up – a spherical, convex mirror reflects back down.

Looking down into the font-like mirror/meniscus at the stairwell’s base opens up a full range of views of Wren’s stairwell. Previously impossible composite perspectives are achieved. Windows running up and down the stairwell mean Perspectives is open to 360º of changing light throughout the day.

While it’s a shame that visitors aren’t allowed to climb the staircase and view the effects of the upper mirror more closely, the act of looking up (either directly or indirectly through the mirror) is fittingly devotional for a cathedral.

This low-intervention installation opens up new perspectives on what is one of London’s truly iconic buildings. Compare this minimalist approach to the bombast of some previous LDF installations (last year’s robot octopus in Trafalgar Square by Kram/Weisshaar is particularly apposite).

The design world is set to see much more of Pawson as his work at the Design Museum’s new home in Kensington takes shape over the next two years. His perspectives on that particular project will be well worth seeing.

Perpectives is free to access at St Paul’s until 23 September. After the festival ends, there will be regular guided access of the installation until later in the year.

Confessions of a Design Geek