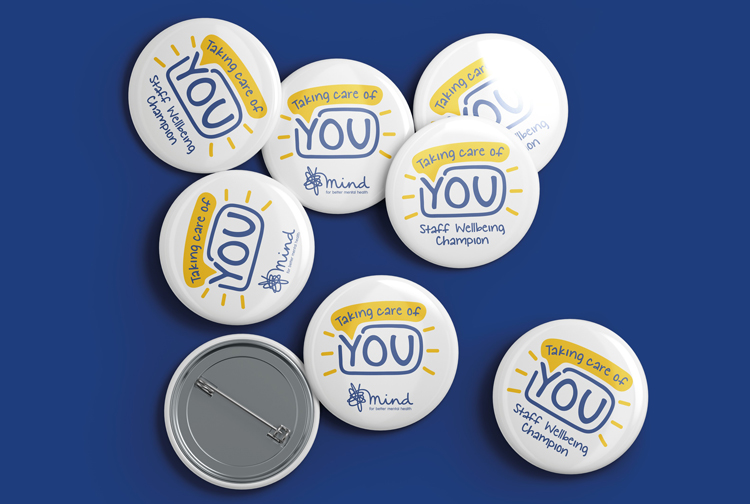 Mind has launched a mental health campaign for frontline, emergency services medical staff in hospitals across the UK, including doctors, nurses, paramedics and administrative roles.

The campaign, which has been designed by Helen Holden Design with strategy completed by Self Communications, takes on a similar style and brand identity to Mind, but is centred around the strapline “Taking care of you”.

The Taking Care of You campaign follows qualitative research conducted by Mind, which involved speaking to over 100 members of staff working in seven hospitals across England and Wales. 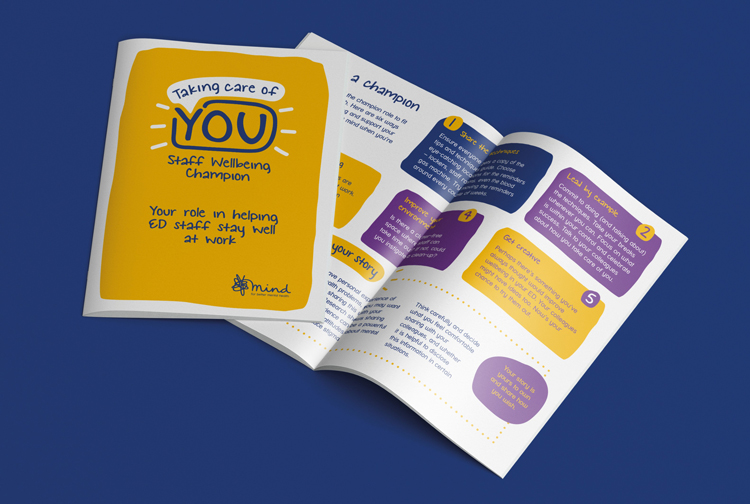 It found that staff working in emergency departments tended to put their own “self-care” last, with “the patient always coming first”, says Sarah Fitzgerald, director at Self Communications. It also found that many reported “mild-to-moderate” constant issues like trouble sleeping or low mood, which were related to an accumulation of daily pressures rather than trauma of specific cases.

“Emergency department staff work in a high-stakes, fast-paced and unpredictable environment,” she says. “They identify with a ‘performance’ culture that’s all about rising to the challenge, thriving on adrenaline and being part of a strong team where you ‘sink or swim’.

“As a result, they tend to only think about their own mental health when having to deal with particularly traumatic cases, rather than something to be aware of all the time,” she continues. “They improvise ways of coping, particularly clinical staff, who develop a kind of ‘armour’ – a resilient professional identity they project at work.”

She adds that factors that create a more stressful working environment include increasing demands on staff, financial pressures, targets, patient safety, media scrutiny and having to care for patients who have mental health issues themselves.

Advice on how to deal with anxiety and stress 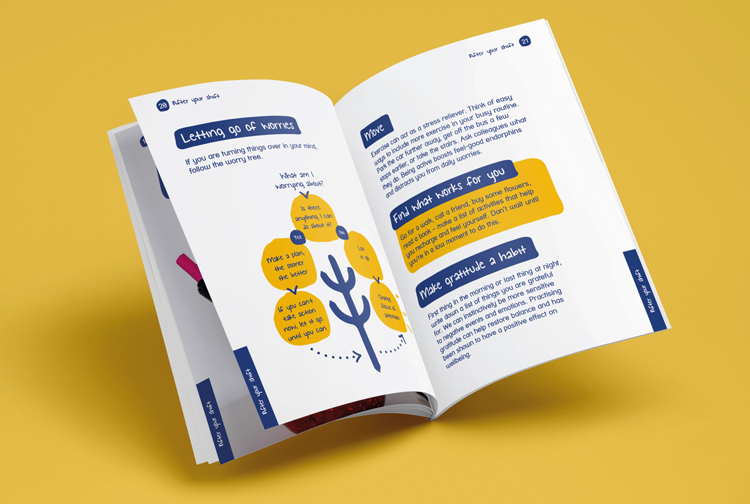 The new Mind campaign aims to raise awareness of “self-care” to emergency department staff and provide them with advice on how to deal with issues such as stress, anxiety and depression.

Its main element is a pocket-sized, A6 advice booklet that “fits neatly into the front pocket of staff scrubs”, says Fitzgerald. It also includes posters and A4-sized booklets, pin-badges, coasters with tips on how to do a “stress scan” of your body, so identify signs like tense muscles, and flyers containing a mental health, “ready for work” checklist.

Helen Holden, founder at her self-named design studio, says the campaign shows how a designer can “stretch an existing brand”, having adapted Mind’s own colour palettes and typefaces.

A predominantly yellow-and-blue palette has been incorporated, which references Mind’s predominant use of blue in its branding, and also Mind’s core, cursive typeface, KG Small Town Southern Girl.

A secondary, sans-serif typeface, Street Corner, is used for body copy, while the colour purple is incorporated as an additional colour in the campaign, with minimal illustrations and mostly practical, text-based design.

“It’s reliant on messaging, not imagery” 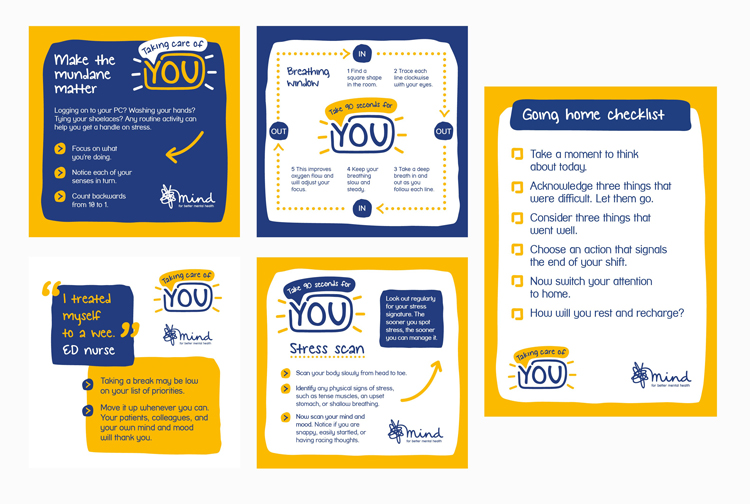 Mind’s “doodle” or “squiggle” logo has also been used as inspiration, with some “doodles” making their way into the campaign, such as directive arrows and small lines used to exaggerate the slogan.

“Because of restrictions to budgets, we wanted to create something that wasn’t reliant on imagery,” says Holden. “Instead, it’s reliant on its messaging and small graphic devices, and is still kept within the framework of the core Mind brand but we’ve just flexed the rules a bit.”

The copy in the campaign aims to be “short and concise”, she adds, taking into consideration the staff’s “lack of time”, and aims to be “direct, but open and warm”. 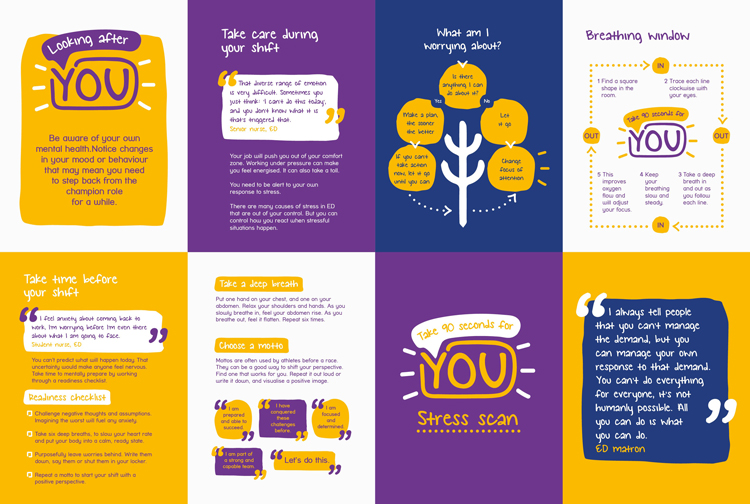 “We wanted to make it inclusive to everyone and friendly, but not too fluffy,” she says. “The main crux of the campaign was to show that wellbeing is fundamental to [the staff’s] jobs, and show them that they can’t do their job without being healthy and well themselves.”

Holden adds that the campaign also aims to help “stop the stigma attached to mental health”, particularly in a sector that has a culture centred around performance and survival, and encourage people to “open up” and talk about “the things that are bothering them day-to-day”.

The campaign is an extension of Mind’s Blue Light Programme, an initiative which has been running for three years and is aimed at those working in emergency “999 services” such as the police force and fire and ambulance services.

The Taking Care of You campaign is rolling out as a pilot in five hospital emergency departments, with an initial reach of 1,300 staff, including consultants, junior doctors, nurses, healthcare assistants and receptionists. Its success will be evaluated in 2019, with the aim to roll it out nationally to roughly 20,000 staff. 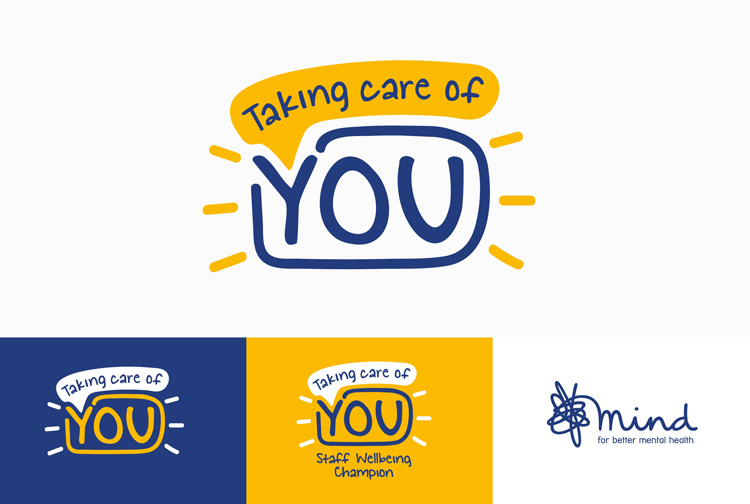 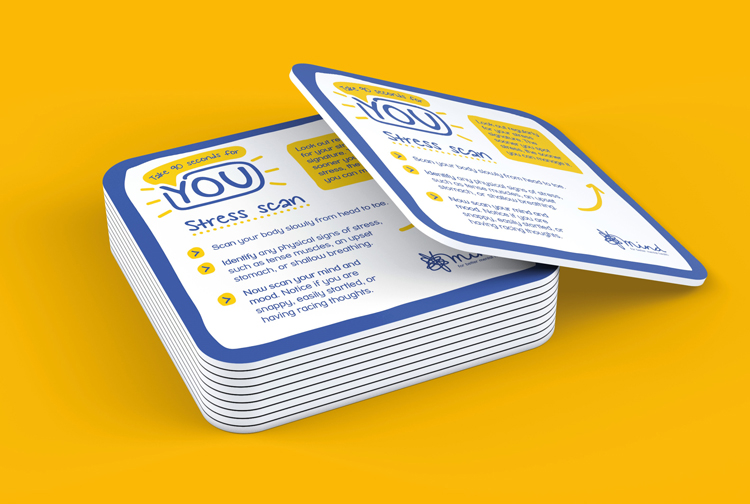 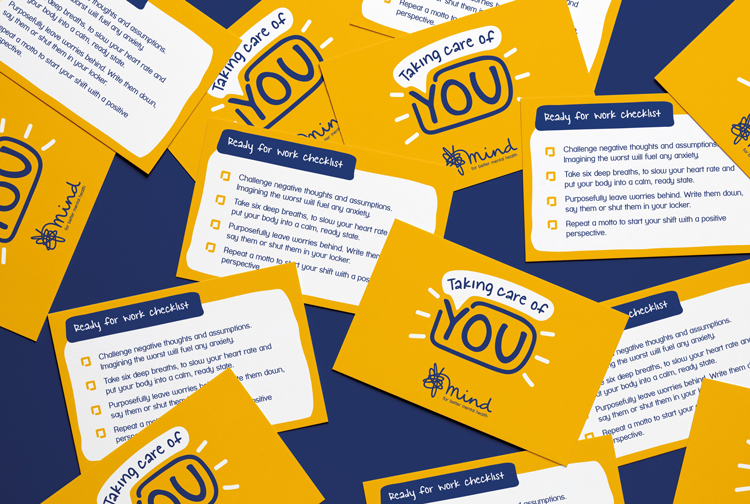