Taboos relating to periods can be found in varying forms and severities around the world. In China, just 2% of the population use tampons because of misplaced health concerns and fears surrounding virginity; in India, six out of ten girls say they aren’t allowed to handle food while menstruating; and in the UK, 137,700 girls aged 10 – 18 skipped school because of their period in 2017.

Negative associations feed into the design of menstrual products. In the UK, traditional packaging works to distract away from the process of menstruation. Overtly feminine tropes are used, like butterflies, flowers, sparkles or pearls and in the same way, the colour red is avoided.

But while these design staples are well-entrenched, several new and existing menstrual care brands are bucking the trend. In line with a wider cultural shift, packaging design is increasingly rebuking the ideas of embarrassment and shame, in favour of products more akin to lifestyle and campaign brands than health care. 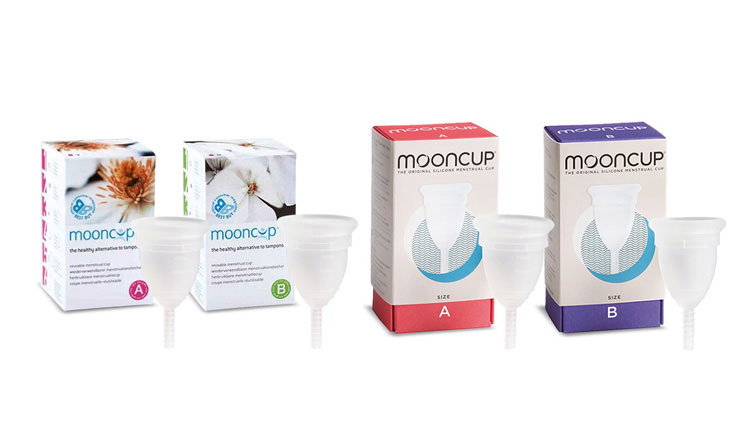 The most recent example of this is menstrual cup company Mooncup. The Mooncup was launched as the first medical-grade silicone cup of its kind in 2002, and was brought to the UK market via Boots’ shelves in 2005.

For years it operated as the only product of its kind on the market, as a niche alternative rather than part of the mainstream. And the company says its initial packaging reflected this, explaining on its website: “[The packaging] was designed to normalise our game changing reusable option: to sit ‘quietly’ next to tampons and pads…to ‘fit in’ rather than be obviously ‘alternative’.”

In a recent packaging overhaul led by London-based brand consultancy Bluemarlin, the veteran brand did away with its ‘quiet’ packaging design. It was replaced with a stylish, lifestyle-oriented design, comprised of new colour palette, new graphics and an updated logo.

Executive strategy director at Bluemarlin Dan Monteith says the new look was designed to “create something that people could ultimately feel proud of, rather than embarrassed by.”

Mooncup’s rebrand (the first major change in its 17-year history) was indicative of a wider change in the market. Google searches of the term “menstrual cup” have almost quadrupled since 2010 and earlier this year Mooncup revealed sales of its product had risen by 98% in the last five years, which suggests both companies and consumers alike are gaining the confidence to branch out. 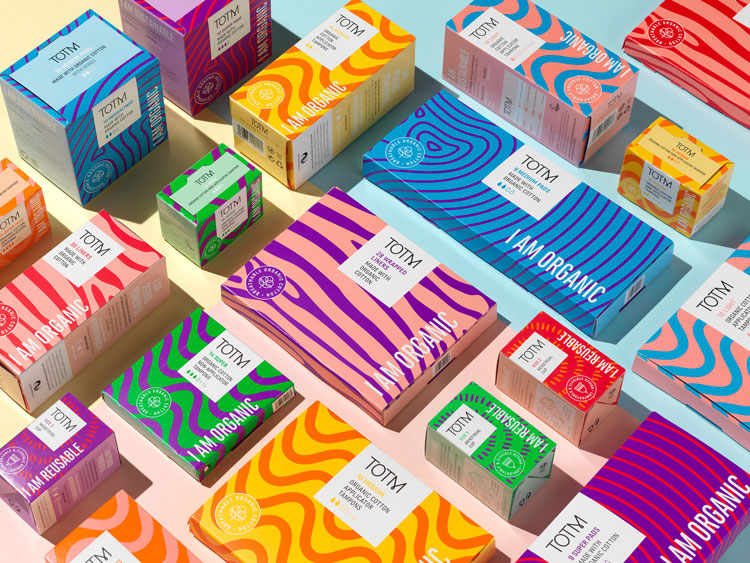 “Disruptive on the store shelf”

A key part of the fight, as indicated by Mooncup and Monteith, is shelf presence. As Mooncup points out: “[It was] time the product shouted proudly from the shelf.” Where once Mooncup had been designed to assimilate, this new look aims to stand out.

The same tactic is being used by alternative and emerging pad and tampon brands, which are increasingly looking to challenge big industry names with campaign- and issue-led platforms.

Period care brand TOTM, for example, trades on being an empowering, eco-friendly product choice. Having built up a following online as a subscription service, its move onto Tesco supermarket shelves presented the three-year-old company with the chance to redesign its packaging for maximum impact. 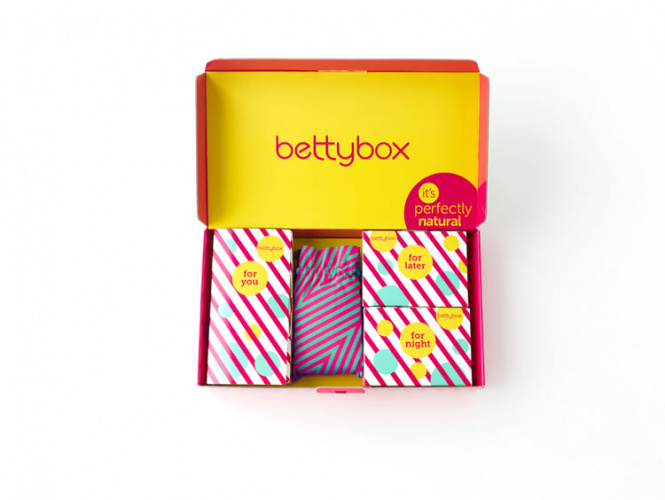 Designing with context in mind

Betty – a subscription box and instore product range aimed at teenagers – followed a similar formula when it rebranded last year. Led by the team at Straight Forward Design, Betty’s identity was crafted to act as “the knowledgeable, empathetic big sister teens need”, with a youthful and approachable spot and stripe design.

“We wanted to be disruptive on the store shelf,” says creative director at Straight Forward Design Mike Foster. He adds an interesting caveat about context: “[The bold print] has a dual effect – it both helps Betty products stand out on the shelf, but it also gives teens relative privacy in its obscurity.

“Because they don’t follow the stereotypical trend of period products, if a pad or a tampon fell out of their bag at school, for example, onlookers won’t be sure what it is out of the context of its competitors.” 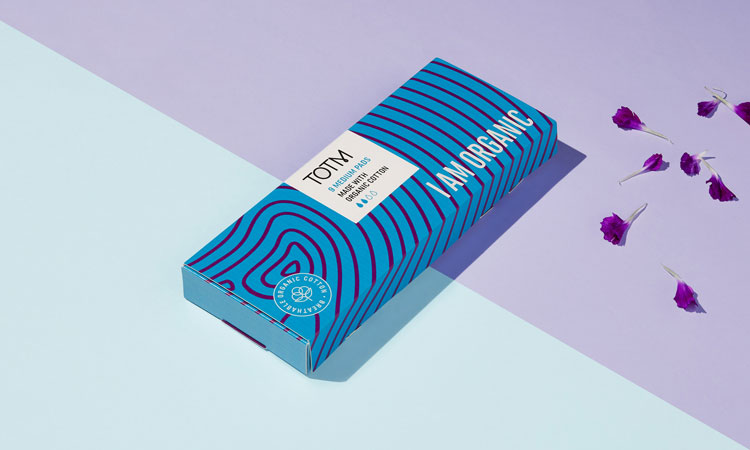 But standing out isn’t the only objective, points out co-founder and co-director of Marsden/Mee Becky King. Where traditional period care brands push for a “grab and go” experience, campaign-led companies like TOTM require their packaging to work harder.

“When people previously bought TOTM products online, they obviously had access to all the information they needed to help make the right purchase,” says King, “but when you’re shopping instore, you need to be able to find all that out from the packaging.”

To communicate TOTM’s organic and empowerment missions on the box, Marsden/Mee used both subtle and upfront design tactics. The nature-inspired patterns aim to convey its eco-friendly message subtly, while bold statements like “I AM ORGANIC” and “I AM POWERFUL” are included to immediately catch the eye.

This need for instant understanding was a similar challenge for Bluemarlin and Mooncup. While enjoying a huge surge in popularity, many people still aren’t familiar with menstrual cups. Mooncup’s previous design decision not to include an image of the product was unnecessarily complicating the matter, according to Monteith.

“Complicated packaging wouldn’t work,” he says. “People needed to be able to figure out exactly what it is as soon as they pick it up.” Moreover, new brands must be informative and engaging enough on-pack to be able to persuade a consumer that often doesn’t have the luxury of time. 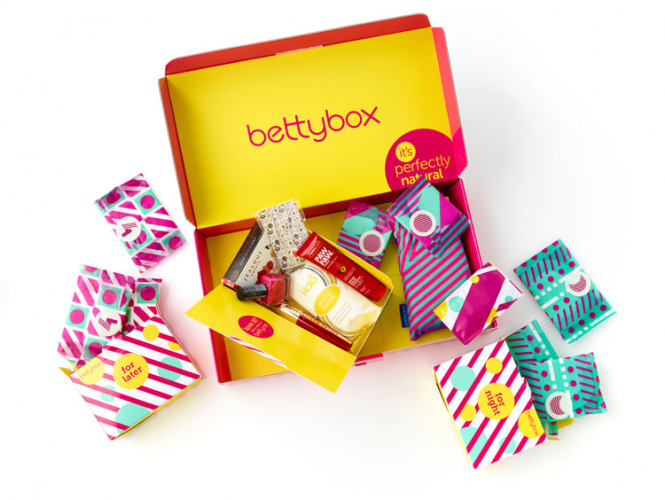 “The most Instagrammable packaging ever”

For nearly all companies pushing the boundaries with packaging design, their social media presence is a logical and necessary extension of branding. Anna Lewis, the other co-founder and co-director of Marsden/Mee says this is indicative of a huge shift in public perception in recent years.

“Even just three years ago, people would have found it weird or shameful for someone to share a picture of their tampon brand on Instagram – but TOTM customers are doing that daily now and it’s really helping to switch the cultural mindset.”

King adds to this, saying that encouraging people to share the TOTM brand on social media was a natural progression: “We didn’t want our products to be hidden away in people’s drawers – we wanted people to feel represented enough by the products they use to feel pride in keeping them in view.

“For that reason, we set out to make the packaging the most Instagrammable product out there, so people didn’t feel the need to hide it there either.”

For Betty, using its “knowledgeable, empathetic” tone of voice online helps to engage with its 11-14-year-old target audience, which Foster says are typically not targeted by other menstrual care brands.

He says: “Betty’s brand personality on social media really helps to demystify things for young people – they’re talking about things in a way that is natural to them.” 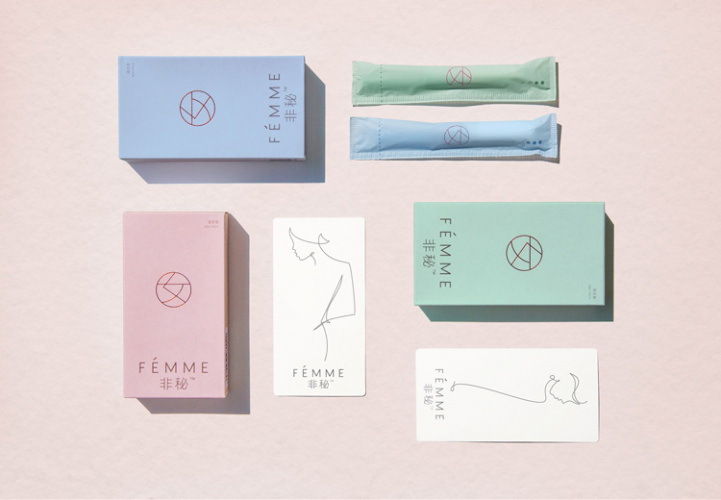 “Based on a modern interpretation of values”

It’s a relationship being played out beyond just the UK market. Back in 2016, London-based design consultancy Pearlfisher worked with Chinese comapny Yoai to create a menstrual care brand that could challenge the country’s deep-rooted scepticism of tampons.

The resulting product featured a “stylish and discreet” design, which combats the “patronising” tone associated with tampons in China, according to creative director Natalie Chung. Victoria Li, from parent company Yoai said the new brand identity was “based on a modern interpretation of Chinese values” rather than something “overtly westernised”.

At the Design Week Awards the following year, the project won both Best Packaging Design and Best In Show, with judges commenting its “strong overall concept and visual language perfectly translated the brand message of spreading good vibes.” 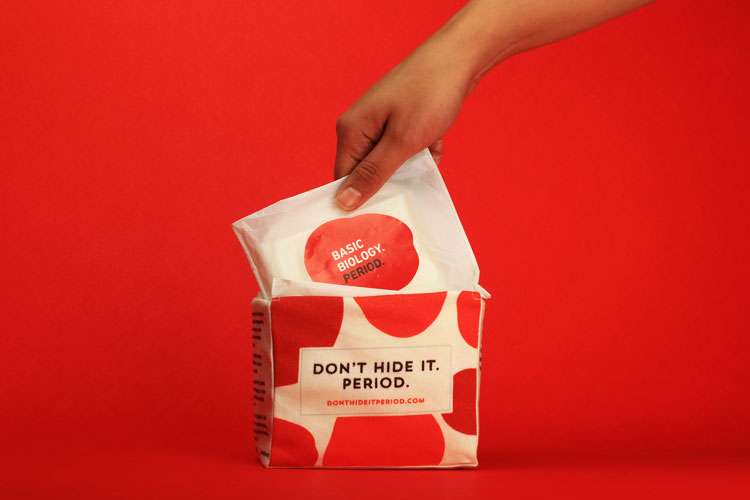 “Prolonged exposure to confidence will cause change”

Meanwhile in India, where period taboos are common, branding and design consultancy NH1 Design created the Don’t Hide It Period campaign. It fights against what it calls the “over-dressing [of products] in florals, butterflies, cursive typography and stereotypical graphics.”

Founder and creative director Neha Tulsian says: “The stereotypes only serve to hide the products that are contained within, because we’re still so ashamed of menstruation.”

To combat this, she says Don’t Hide It Period products are “designed well”, using a red colour palette to confront the reality of menstruation. In a similar way to TOTM, the products also sport empowering messages like “It’s just blood”, “Don’t be shy” and “Basic biology”.

Tulsian ends: “With prolonged exposure to confident branding and messaging like those on Don’t Hide It Period products, we believe the perception around periods will change.

“Eventually, we want to push beyond India, converting the packaging into local languages, so that no one has to feel embarrassed to say the word ‘period’.”

Aporva Baxi: “Brand and UX must not be forgotten in the streaming wars”