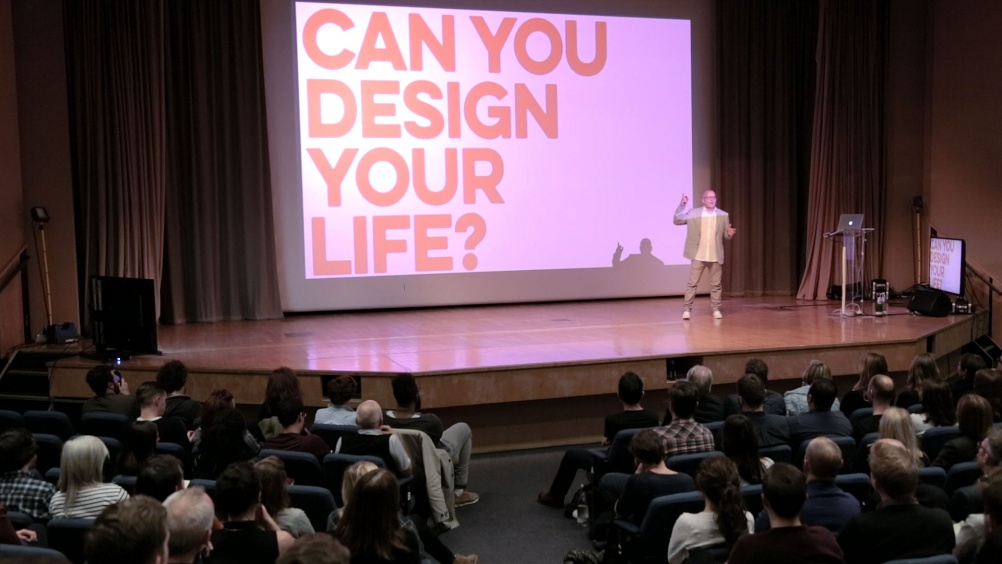 After a lifetime of designing for other people and the onset of some kind of breakdown or midlife crisis, Vince Frost, who had enjoyed a long career as a designer with Pentagram and his own consultancy Frost* Collective, took matters into his own hands and decided to redesign himself.

Speaking at the D&AD’s President’s Lecture on Tuesday, Frost told an audience that his work had been getting the better of him, that he was “stressed beyond belief and eating and drinking all the wrong things”. As much as two bottles of wine a day while chain smoking and not getting enough sleep was beginning to take its toll.

In a very honest and self-effacing talk Frost gave a witty account of the main points in his recently published book Design Your Life.

He claims that the principles of design can be applied to your life – and we should point out you don’t have to have wrestled with a borderline drink problem to benefit from his tips; really you can look at the book as a conceit which might help you make changes in your life but also become a better designer.

“I was taught to be a designer but not a human”

“I was taught to be a designer but not to be a human being so I decided to stop procrastinating and redesign my life,” says Frost.

Facing difficult decisions, actually getting on with the whole thing and doing something about it is like “eating a live frog” according to Frost who has borrowed the phrase from self help book Eat That Frog by Brian Tracy.

Frost is keen to point out “I’m not a motivational speaker, I’m just a designer,” but says he hopes that his story will resonate with other designers.

In his work with the Frost* Collective consultancy Frost says they approach projects with three principals: Learn, Think, Create.

“Learn: Be clear of your parameters, get a good brief, dig deep, question everything and listen to the clues.”

What he means by this is: “You need to know what the problem is in front of you. Listening and feeling is critical at this stage as well as using your own intuition. To get the full understanding of a problem you need to get deep into it.”

Frost says by way of assessing his personal circumstances, or brief, he looked at his “parameters”.

“Don’t be a whinger”

Frost makes the point that to get bogged down in parameters though can be a mistake. “Don’t be a whinger,” he says. “It never helps to blame anyone or anything. There will always be circumstances that you feel are conspiring against you but don’t wait for the perfect time to take action.”

While he’s an advocate of making the jump into the unknown and saying yes to things, he did recall the cautionary tale of the time he agreed to become art director of Vogue Japan.

Frost says: “I said yes and from then on it was all first class flights, a clothing allowance, a beautiful apartment and everything was new different and exciting, until I started the job.

“I didn’t understand Japanese language or typography – they read from right to left and the text looked like body copy or blurb to me. I wasn’t outside my comfort zone – there was no comfort zone. I remember going to shoots in the woods with an amazing crew and thinking ‘I know nothing about fashion’. I was fired after eight months.”

So the caveat is that stretching yourself beyond your comfort zone “will grow your mind and lose your hair,” he says, adding, “Push yourself in life but don’t break yourself. You have to be mindful of that. Know your limits – and get everything in writing.” 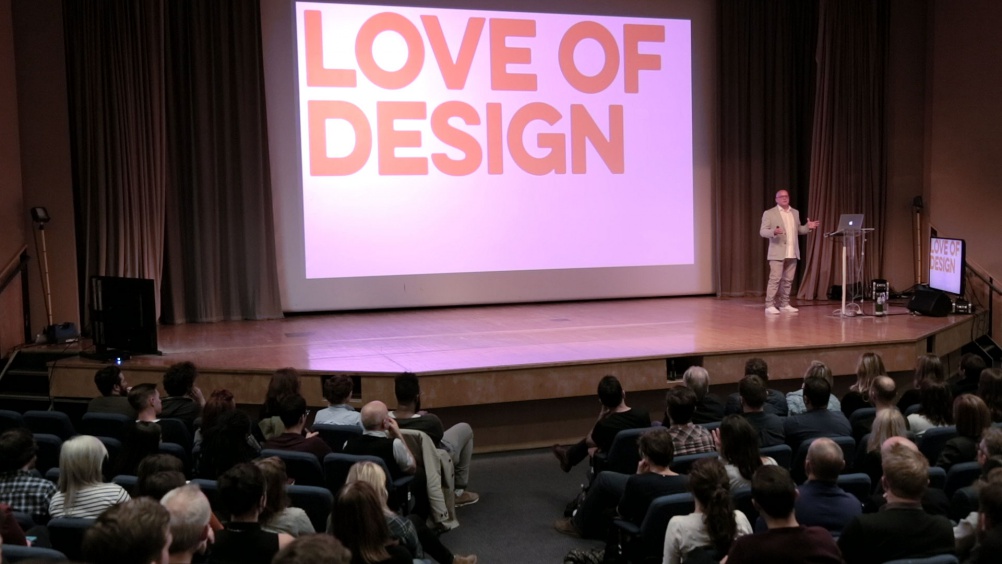 “Think: Surround yourself with others who care about you, you’ll be a success if you can be open to new ideas, eat the frog, and tackle the hard stuff.”

In the face of a loss of confidence or momentum this means “bringing in other people into your life to help you fill your potential, at work or in your personal life”.

We already know about Eating The Frog and tackling things head on and Frost is also keen on trying to stay “fit-ish”, look after himself and get a good work-life balance.

“Create: Get out in the real world to see how your ideas stand up, keep adjusting, design by failure, get yourself good mentors, or stalk someone like I did.”

He admittedly got into Pentagram “through the back door” and quickly looked to learn from the partners working there at the time.

Taking us back to his wide-eyed impressions of them we learn that John Rushworth “opened his mind” and that Alan Fletcher was “a genius”.

“Fletcher, who was in his 70s then, ironed his jeans, smoked like a chimney and was as gruff as hell but his work was so effortless and I wanted to be like him and know what he was thinking and why he did what he did,” says Frost.

“Get the fuck out of my chair”

Better still is his memory of the Kenneth Grange “who I don’t think liked me and always looked at me suspiciously,” says Frost.

“One day it was about 8am and we’d been working on a project for three nights and I thought I’d take a rest on a chaise longue behind Grange’s desk. I lay down for a second and then was woken up by a very angry bear, Kenneth Grange shouting, ‘Get the fuck out of my chair’”.

While “looking to your hero figures,” is important for Frost, so is “realising you don’t have to be good at everything and knowing when to seek help.”

But if there is one thing he wants us to know it is this: “It’s important to be focused on what you want to learn. Put your energy into learning something. Learn from mistakes, but better still avoid them all together. Life is messy. Be the best you can be.”

How the Natural History Museum is implementing a new retail strategy