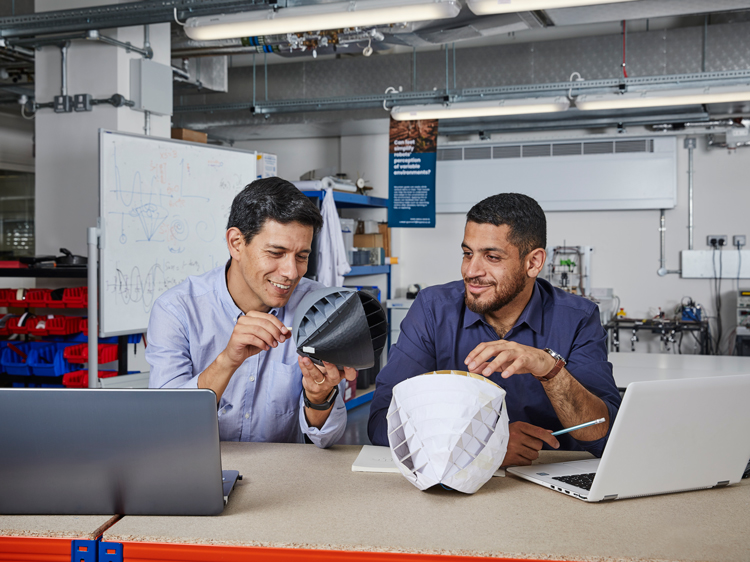 The James Dyson Award has announced this year’s international winner, which is a wind turbine that can be used to harness energy in the middle of cities.

Unlike existing wind turbines, the O-Wind Turbine is a 25cm sphere with geometric vents at different angles, meaning wind can be captured from many different directions, rather than unidirectionally. It sits on a fixed axis, but spins when wind hits it.

It has been invented by Chilean designer Nicolas Orellana and Kenyan designer Yassen Noorani, who are both based in the UK and are currently international students studying for a Master of Science (MSc) in international innovation at Lancaster University.

When wind turns the device, gears drive a generator in it, converting wind into electricity, which can either be used as a direct power source, or can be fed into an electricity grid.

Can be installed on balconies and buildings

Because of its ability to register wind from any direction, the turbine could be installed in a wide range of places, including attached to the side of buildings or placed on balconies, according to the designers.

Their small size of 25cm also mean they could be installed by individuals, with hopes this could provide those in developing – as well as developed – countries with an “affordable” energy source, says Orellana.

The invention looks to harness wind that is generated in built-up areas but not utilised, the designers say. Wind in cities is multi-directional, they add, as it gets trapped between buildings, dragged down to streets, then pushed up into the sky, causing “chaotic” wind.

Traditional turbines are not able to capture it as they are intended for wind travelling in one direction, so they work better in the countryside and open spaces. 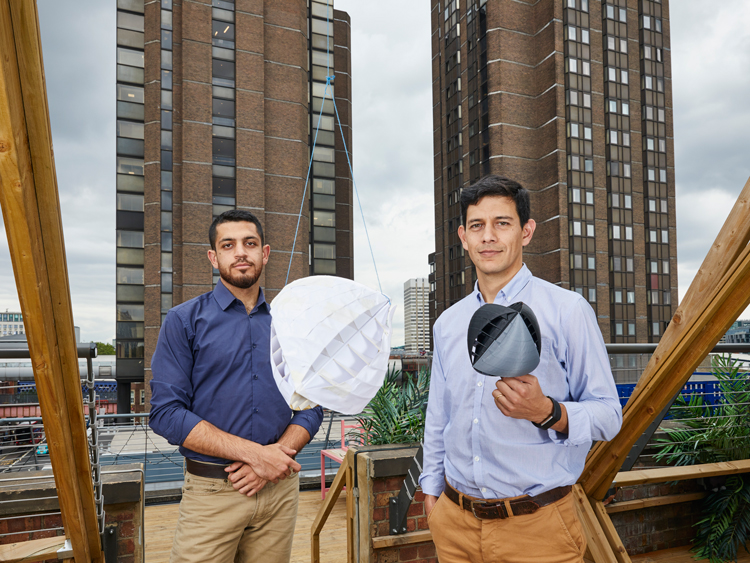 “[The O-Wind Turbine] will allow people who live in apartments and who don’t have the technology optimised for generating electricity, to do so,” says Orellana. “Cities have chaotic wind, so there needs to be a solution that could take horizontal and vertical wind, and when it changes direction, the turbine keeps working.”

The ball-shaped, moving turbine was inspired by a failed NASA project: the Mars Tumbleweed Space Rover was an inflatable ball designed to bounce and roll across the planet’s surface (like tumbleweed), to measure atmospheric conditions and geographical location.

However, it was only powered by unidirectional wind, meaning its mobility was impaired when faced with obstructions.

Based on this, Orellana developed a space rover which could move and explore a surface using cross-winds for a final-year project during his undergraduate degree and tested it in a desert in Chile. Based on his learnings, the designers came up with their wind turbine.

Orellana says that O-Wind Turbine aims to “improve the usability and affordability of turbines for people across the world”.

“Cities are windy places but we are currently not harnessing this resource,” he says. “Our belief is that by making it easier to generate green energy, people will be encouraged to play a bigger role in conserving our planet.”

Sir James Dyson, founder at his self-named award, says: “The O-Wind Turbine takes the enormous challenge of producing renewable energy and by using geometry it can harness energy in places where we’ve scarcely been looking – it’s an ingenious concept.”

The designers will now receive £30,000 to go towards the project, plus an extra £5,000 for their university department.

Orellana and Noorani are currently in discussion with investors to secure a deal that will enable the O-Wind Turbine to be mass-produced and go to market.

The aim is to come up with different business models, with “subsidies” given to developing countries, Orellana says.

The James Dyson Award has been running every year since 2003. It is open to graduates within four years and current university students taking product design, industrial design or engineering, from 27 countries around the world, with the broad brief of “design something which solves a problem, big or small”.

This year’s international runners-up include Excelscope 2.0, a malaria diagnostic device designed by a team from the Delft Technical University in the Netherlands, which tests for malaria through a smartphone, and Air Chair, a wheelchair-cum-airplane-seat which can be used seamlessly by a disabled user when travelling, designed by two students from the American University in Sharjah.