“I was absolutely useless at playing any instrument my dad tried me out at,” says Morag Myerscough, whose late father was a viola-player and mother is a textiles artist. “I loved making, and I could sew anything – but because my mum did textiles, I didn’t want to do that.”

Pursuing what she describes as “something genetic”, she went on to study graphic design at St Martin’s College, and an MA in the same subject at the Royal College of Art, to the despair of her school head teacher. “She said to me ‘You’ll never make a living’,” Myerscough says. “That’s probably the worst advice I’ve ever had. The most important thing in life is that somebody doesn’t push you into something you don’t want to do.”

She went on to set up Studio Myerscough in 1993, and in 2010, alongside Luke Morgan and the late Gerrard O’Carroll, founded Supergroup – a team of creatives who embark on both individual and group social engagement projects. Myerscough counts her inspirations as Andy Warhol (“I just love Pop Art, which you can probably tell,”) Pablo Picasso, Bridget Riley, The Bauhaus and Memphis. “I liked the fact that they were architects but also furniture and textiles designers,” she says. “They weren’t defined by a particular discipline – they could do whatever they wanted.”

This outlook is one that Myerscough has carried into her own work – fast-forward a few decades, and she is a nationwide inspirational figure in graphic design, having created more than 30 public art installations and undertaken hundreds of projects over her 27-year career – most of which have allowed her creative license to communicate her own signature, colourful style.

“What’s good is that people know that if they choose me, then they’re going to have to be prepared for what they get,” she says. “I respond to architecture and briefs, my approach develops and changes all the time – but I am going to make an impact on the building.”

The public has seen Myerscough’s “impact” spread across multiple installations, from the Temple of Agape, designed by her and fellow Supergroup member Luke Morgan for the London Southbank’s Festival of Love in 2014, to her controversial neon light project illustrating the letter “c” for a British Library exhibition in 2004 – which read, “Has Anybody Seen Mike Hunt?” 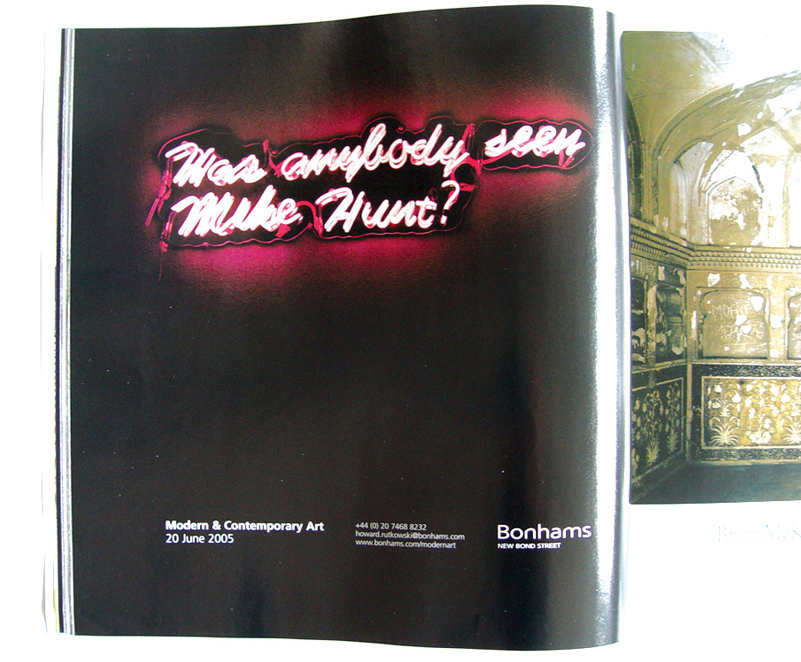 Myerscough’s vibrant, and often brave, style is one that’s synonymous with her personality – from her curious Twitter feed, which consists only of a mysterious combination of colours and numbers, to the hundreds of typically Myerscough rainbow miniature artworks spanning her art studio walls, there’s a feeling of uniqueness and non-conformity to all her work.

“When I was at college, a tutor said to me, ‘You’ll never make a decent designer because you’ve got a messy desk’,” she says. “A few years later, I was doing an exciting project, and I saw him photocopying fruit juice boxes in a photocopier shop. A level of messiness is sort of who I am – you don’t have to conform.”

If there wasn’t evidence enough that Myerscough lives and breathes her work, she explains all this while sat in her high ceilinged art studio, which doubles up as her apartment, working alongside fellow Supergroup member Morgan past office hours, with her dog Lemmy curled at her feet.

But sitting in her art cocoon is not something that she does much of. Aside from competing with her older sister over who can meet their stepometer target of 10,000 steps a day first (which apparently is not as unobtainable as it sounds), the designer is often juggling multiple public art projects, from bridge rejuvenations and Southbank festivals to children’s hospital ward redesigns.

“It’s good for me as a designer,” says Myerscough, speaking on her work with local communities. “It takes me out of the ivory tower place of sitting here in my studio and making whatever I want to. It grounds me back into reality, which I think is really important.”

She talks about the importance of connecting with people when undertaking social engagement projects, particularly through workshops: “It doesn’t mean your work has to be compromised or that you need to do what people tell you to do, but you do need to have an understanding. You need to know how to articulate things to lots of different people and be able to be quite human.”

And unlike branding projects, there aren’t “big power battles” with stakeholders – the most important people are the ones who will be affected by the work. “That includes the doctors and nurses in the hospitals as well as the patients,” she says. “It’s about discussing things and listening when they have concerns.”

This escape from her “ivory tower”, which allows her to meet and involve her audience in her work, is part of what defines Myerscough as an artist. She says her most rewarding project to date was Dazzle in 2012: the redesign of Bart’s New Children’s Hospital’s dining rooms in collaboration with arts organisation Vital Arts, where young patients created sentences in workshops with poet Lemn Sissay that were then used to decorate the walls.

Myerscough says that the experience showed her how vital it was to involve those who would be living with the design in the process. “I don’t have children so I haven’t experienced the distraught feeling of having a child who is really ill,” she says. “Lemn wrote lovely poems with the patients, and I did visual workshops using the words. The kids were really happy not to just be playing on Gameboys – they were excited about making things. It really affected me as to making people feel like they’re part of something.”

She has also found that involving communities has enhanced and offered a new perspective for her work – such as when she worked alongside poet Yemisi Blake in 2011 to transform Islington Council’s performing arts centre Platform, a project commissioned by All Change Arts. Blake conducted workshops with a group of young advisors to create a poem that was written from the perspective of the building, giving it a voice – the first line, ‘I am the creation of your imagination’, was installed onto the roof.

“The community knows that these were their words, and that’s very powerful,” Myerscough says. “Poetry is an amazing form of expression.”

As is artwork, as shown by her collaboration with the children of Glenfrome Primary School, Eastville, to develop the Wonder Pavilion, an immersive arts piece for the school’s gardens. When drawing with the students, she found they offered a fresh approach with no preconceptions.

“The kids’ patterns were better than my patterns,” she says. “They did theirs naturally, while mine were controlled. It was fascinating to break down that formal way of thinking. People can enrich the work you’re doing – it doesn’t mean you’re going to get scribbled drawings.”

And creating an environment that makes people feel proud, at home and happy is ultimately Myerscough’s goal. She worked with architect AHMM and the school’s headteacher and students to transform the interiors of Westminster Academy in 2008, the school saw a significant rise in A-C grades – but the designer says this isn’t down to the pretty patterns on the walls. Instead, she says, the design merely helped to lift the mood and esteem of the teachers and students working there, encouraging them to achieve.

“It’s this mind-set that if you care about your surroundings, then other people will care about them too,” she says. “It’s a knock-on effect. It’s not about what we do as designers – it’s about the people in the places that live with the design.”

Myerscough has seven projects in the pipeline for 2015 (“I like it if there’s a lot to do and think about,”) including the exhibition design for the highly anticipated Design Museum relaunch as it moves to its new site in Kensington (“No, I really can’t give any hints.”). Alongside this, she will be rejuvenating two bridges in Finsbury Park, close to where she grew up in Holloway, London, completing two hospital commissions in Sweden and Sheffield and revamping the entrance to Royal London Hospital.

At the end of 2015, she will also put on an exhibition revealing the meaning behind her Twitter feed. “I’ve got to do it this year, otherwise I’ll forget what I did,” Myerscough says. “I like it when people try to guess what the colours mean – often they’re wrong.”

It’s not surprising that up until recently she was waking up at 5am every morning to start work in her studio (“I started walking and going to Pilates ––you’ve got to get the balance a bit better,” she says). So what exactly is it that motivates her to focus on so many things at once?

“I get up in the morning because things are challenges,” she says. “Things aren’t repetitive. Geoff Fowle, a tutor at college, once told me, ‘Morag, always think right up to the top. Think as far as you can go – because you can always come down but you can never go up’.”

She adds that her advice for young designers is to focus on doing what they love, and thinking about where they want to get to: “I have always enjoyed what I do,” she says. “People say you can tell that in the work I produce: it looks happy. Of course, if you’re a person who wants to do angsty things, that’s okay too.”

As an offering for a slightly more tangible tip, she recalls the words of one of her college tutors: “Always cut to waste with a ruler. Cut on the outside rather than the inside.”

Looking to the future, Myerscough says she would like to do more projects with older people, such as her ongoing Finsbury Park bridge project, which has involved workshops at daycare centres. “I think that sometimes older people are left,” she says. “There are projects going on in dementia but I think that they don’t get as many as children do.”

And with an eclectic mix of projects under her belt and a genuine excitement for helping people through the medium of design, it doesn’t look like she is set to quit her day job anytime soon. “I don’t think I was ever very talented,” she says. “What I love about doing a subject that, unlike music, isn’t dependant on physical accuracy, is that you can have a long career, journeying along it to find your place. Maybe if I’d done fine art or sculpture, it would have been different. Before, there wasn’t a place for what I do, but now there is – I feel lucky.”