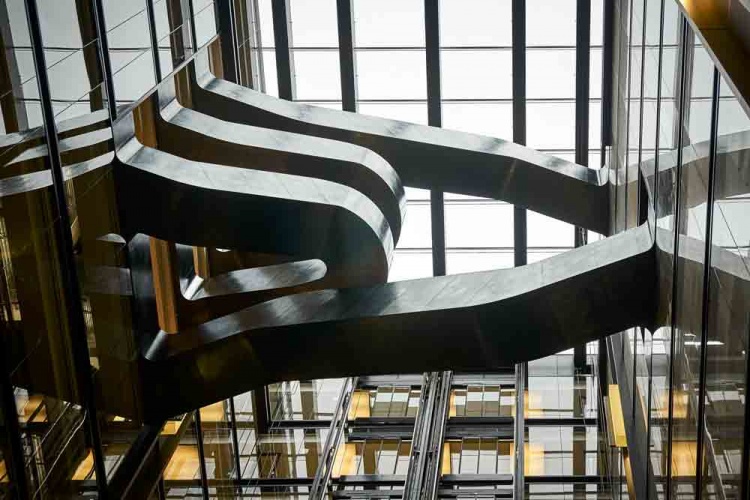 Google is well-known for its imaginative, forward thinking approach when it comes to the design of its workspace environments. Over the past few years, everything from indoor slides and putting greens to caravan meeting rooms and bowling alleys have made appearances at its offices all over the world.

But the playful elements and primary colours the tech giant has become synonymous with are noticeably absent from its latest site, situated at Six Pancras Square in central London.

Probably the only in-your-face ode to colour in the company’s new office is the eponymous glittering silver mural that greets you in the reception area of the 34,000m2, 11-storey building. The rest of the building comprises stripped back interiors and muted furnishings by companies such as Swiss manufacturer, Vitra.

Designed by architectural firm AHMM, the site recently became home to more than 800 staff – commonly known as “Googlers” – when it opened earlier this summer.

Only phase one of construction has been completed so far, encompassing the top six floors of the building. The lower floors are still being built, with a total of 2,500 Googlers set to move in once they are completed later this year.

It is only after you are whisked from the reception in one of the sleek glass lifts up to the eighth floor that you encounter some of the more innovative design features that Google and AHMM have been working on.

A staircase to encourage interaction 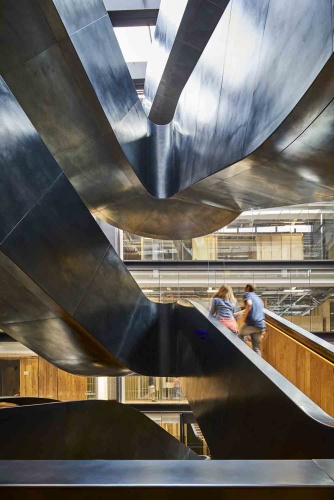 A winding black steel and oak staircase dominates the top half of the building, creating a connected network of spaces. As well as allowing for easy access to the upper floors, it also encourages interaction between Googlers who don’t necessarily work in close vicinity to each other on a day-to-day basis.

Oak flooring becomes the “yellow brick road” of the building, connecting the staircase and corridors to the rest of the office space, says Real Estate project executive at Google, Andrew Martin.

As for the workspaces themselves, the Google Real Estate team and the architects have taken an “honest” approach to interiors, according to associate director of AHMM, Ceri Davies. When it came to the ceilings, for instance, they decided to strip them out entirely. 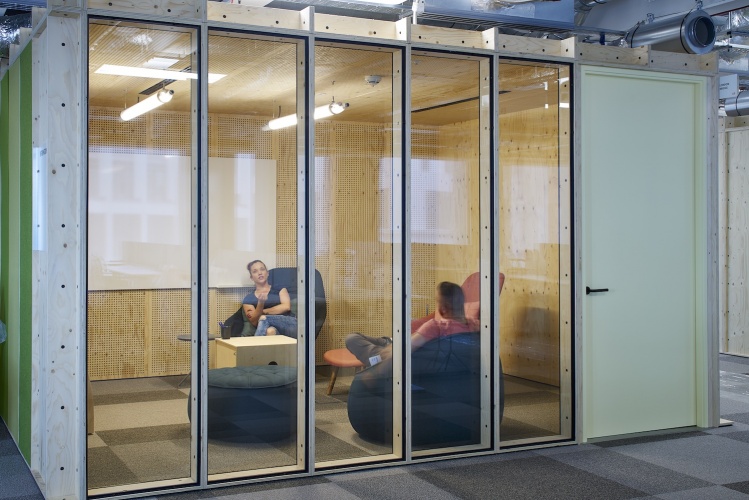 More than 90 modular pod-style meeting rooms – known as Jacks – have also been installed on all but one of the floors. They are intended to be Google’s solution to workspace inflexibility and space shortages.

Made from timber and using deliberately stripped back interiors – they come with little more than a few chairs, a table and an inbuilt video conferencing system – the rooms-cum-furnishings are designed to be completely customisable depending on the needs of the Googlers.

Davies explains that previous Google offices were forever having plasterboard stripped out to accommodate changing team sizes and room requirements. The Jack cassette system means that the rooms can be completely taken apart and reassembled by in-house maintenance staff within hours or days, saving both time and expense.

“In other words, you can hack it,” she says. The smallest Jack can fit two people, while the largest accommodates up to eight.

Over the coming months a total of 160 of them will be installed into the London office, and Googlers are expected to take a “plug and play” approach to the meeting rooms – altering their size, adding different artworks and changing the colour of components such as the doors as they wish. 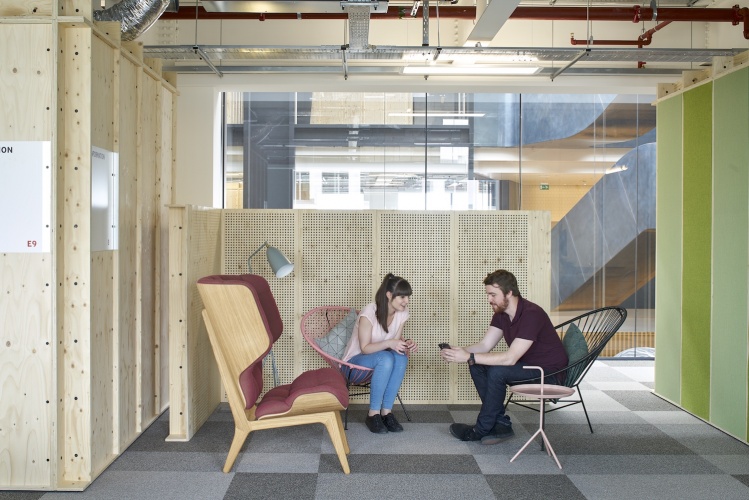 Taking the stairs to the eighth floor then brings you to the social hub of the office. Davies describes the floor as the “jam in the centre of the sandwich”, with a canteen, quiet area with sleep pods, a kitchen workshop and events space all included.

There are also allusions to the outside world and popular culture – various areas, such as “Major Tom”, have been named in reference to David Bowie tracks, as a tribute to the singer who died during the construction of the building.

Another breakout area is called “Talk 9 ¾”, due to the site’s location close to the fictional platform 9 ¾ that features at King’s Cross station in the Harry Potter book series. 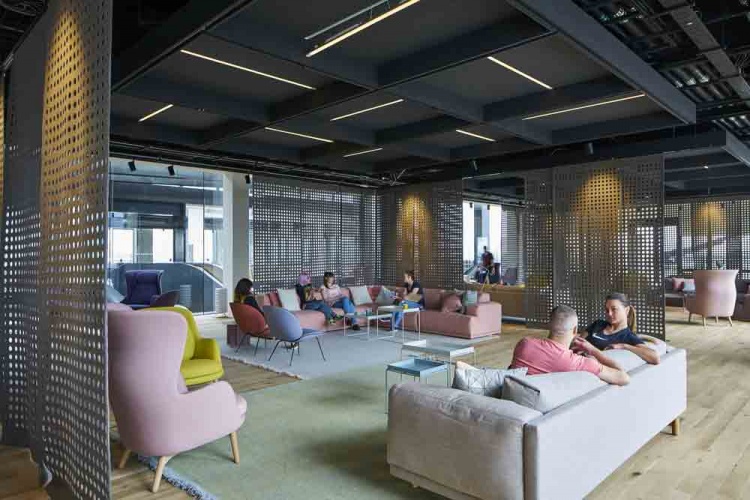 On the top floor, the roof terrace is one of the office’s more dramatic elements. It offers panoramic views all the way from the Olympic Park in the east to the arch of Wembley Stadium in north-west London, giving the Googlers a place to recharge and reflect.

The rest of the Six Pancras Square site is more understated than some of Google’s previous projects, but perhaps a little cleverer in terms of some of its key design features, such as Jack.

“The inflexibility of space has become particularly problematic in the 21st century business environment,” says Dr Kerstin Sailer, a lecturer at the Bartlett School of Architecture at University College London, who has written a white paper on the system.

“It could be argued that Google is now making a move towards a more profound workplace innovation”.

All photos by Tim Soars