According to studio founder Jamie Ellul, Royal Mail’s brief sought to incorporate an artist with an unusual style or use of materials, following the success of Charlie Smith Design’s 2019 paper-cut stamps.

The studio trawled the internet far and wide, Ellul explains, until they landed upon Cocco’s Instagram account. The Argentinian artist, who is now in his 80s, paints in a style he calls ‘sacrocubist’ – a way of illustrating sacred events with the stylings of the post-cubist movement.

A “celebratory” version of the Nativitity

“It had exactly the right feel, contemporary but also very respectful of the subject matter,” Ellul says. The studio’s brief for the artist was to “tell the Nativity story without words – and to create jewel-like, colourful stamps that feel very celebratory”.

Supple worked with Royal Mail to pick a selection of Nativity scenes for the stamps, with a mix of “close crops, wider scenes and a mix of characters”, Ellul adds.

Cocco’s use of colour attracted the studio to his work, Ellul explains. “We asked him to dial up the bright colours even more,” he adds, with a colour code for different scenes.

For example blue is used for the host of angels, purple for the shepherds, and red for the Madonna and child. As well as relating to different parts of the Nativity story, the stamps’ varying colour palettes help to differentiate denominations, according to Ellul. 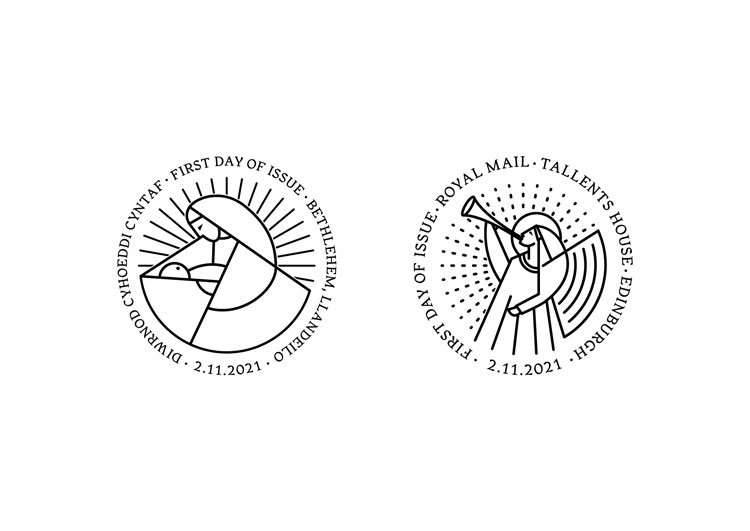 For the first day cover and presentation park, Supple has used Cocco’s illustrations in an attempt to unite the series visually. “The cubist angles Jorge uses in his paintings were a great way to bring the whole set together,” he says. “The abstract skies he created were just beautiful and really capture an ethereal light and feeling of holiness.”

The design team used those illustrations as an abstract background, which “frame the stamps in a really harmonious way”, Ellul adds.

Fontsmith’s FS Olivia has been used for body copy on packs, while Playtype’s Berlingske Serif Stencil Black was used for the Christmas 2021 headline. The latter was chosen “as it had some of the angles and sharpness of Jorge’s work”, says Ellul.

Supple has crafted two postmarks for the Christmas collection, which both depict scenes from the Nativity. The Tallents House postmark has an angel, while the alternative Bethlehem, Llandeilo postmark shows a mother and child.

A limited number of the stamps will have barcodes, which will aid with identification and “pave the way for innovative customer services in the future”, according to Royal Mail.

What do you think of Royal Mail’s 2021 Christmas stamp series? Let us know in the comments below.

Design events to catch in November