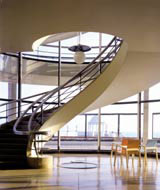 For every design competition rejection letter sent out there’s a designer somewhere going ‘Well, I knew my stuff was too radical/ traditional, abstract/ concrete, dark/ bright for the judges, so what do you expect?’ to his sympathetically nodding colleagues as they stare deep into their pints.

Seventy years ago, in appointing architect Thomas Tait – himself a forward looking champion of the Modernist movement – as the judge for the competition to design an entertainment centre for the East Sussex town of Bexhill-on-Sea, the borough council and the Ratepayers’ Association were sending out a clear message about the type of work they were looking for. It was in itself an interesting reversal of thinking about the town’s future.

During the 1920s, while other seaside towns with new attractions had actively courted the new class of holiday-makers and tourists, Bexhill council had delayed, fearing the quiet character of the town would be destroyed. But by 1933 it had taken a brave step into the future.

The pavilion competition conditions stipulated that the designs must encompass a 1500-seat theatre for concerts and drama, a conference room, a 200-seat restaurant and terrace facing the sea with a dancefloor, a reading room and lounge. This was originally to be achieved within a budget of £50 000.

The winning entry by Eric Mendelsohn and Serge Chermayeff, a German and a Russian, was completed at the end of 1935 and is largely what you’ll find, situated between a car park and the crazy golf, if you make the journey down to Bexhill any weekend. To describe the current state of the De La Warr Pavilion as one of ‘faded grandeur’ is probably doing ‘faded grandeur’ a bit of a disservice.

Surprisingly, the bulk of the damage to this steel framed building hasn’t been from the corrosive effect of the sea air so much as from the interior design tastes of the 1970s: fake brick-work and fireplaces in the bar area (since stripped out) and the unsympathetic placement of firescreens, wheelchair ramps and a lift in the centre of the staircase leading to the theatre. Similarly, the glazed north staircase (currently closed to visitors), which is remarkable for the way it appears to float effortlessly with little support from outside, is papered on the inside with a wallpaper that shouldn’t be seen unless it’s late on a Friday and accompanied by a chicken tikka masala.

If you do visit over the bank holiday weekends in May you’ll find an exhibition with excellent photographs showing the pavilion in its pomp, as well as the planned restoration and renovation being overseen by architect John McAslan & Partners that’s due to be finished by autumn 2004.

Currently, there’s also an exhibition by Kjell Torriset, a Norwegain painter who lives just up the coast in St Leonards-on-Sea. It’s worth phoning to check which parts of the building are open before you set off (01424 787949).

Throughout the pavilion you’ll find small touches of the original sense of the place – there are a few of the original restaurant chairs and tables on display and the chrome light fitting that hangs down the length of southern staircase and stripped of the yellow gloss paint that concealed it for years.

There are a few moments, as you look out to sea through the southern bird cage with its circular staircase or along the upstairs terrace and the shadows fall just right, when you can imagine what it must have been like when it first appeared in the few years between its completion and the outbreak of World War ll.

Woodroffe is in no way the sole of discretion