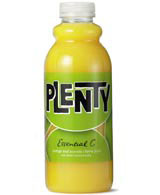 GlaxoSmithKline is entering the juice market for the second time with a national relaunch this month of Plenty, branded and packaged by Seachange and aimed at health-conscious consumers.

It is the second stab at Plenty, a healthy juice brand from GSK’s innovations subsidiary, The Futures Group.

‘Our test last year was a success. But this time we have tried to make the product more mainstream and increased the pack size,’ says Futures Group marketing development manager Mary Ramadan. ‘We are benefits-led where as other juices are ingredients-led,’ she adds.

Ramadan denies the drink under-performed and says while Plenty’s branding has been changed the product remains largely the same.

Available in large-serving, 750ml-sized bottles, its competitors are ‘fridge’ juice brands such as Tropicana and Ocean Spray.

‘The identity and graphics are designed to convey the “natural science” aspect of the brand [which claims to have natural health benefits],’ says Seachange creative director Sally Costen.

The graphics feature a vibrant colour palette and overlapping ellipses to create ‘fruit connotations’ and a glimpse of the juice inside. ‘We wanted to avoid real fruit depictions and instead create greater impact through bold colours,’ she adds.

The consultancy won the Plenty work on the back of previous branding and packaging work with the Futures Group on a still water brand, Aka:wa, which was launched last October.

Plenty, which launches with two flavours, will retail initially in Tesco Metro stores nationwide from 12 May. Launches will follow in Morrisons, Asda and Safeways stores later on this summer, says Ramadan.