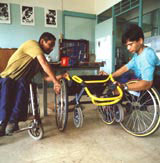 A series of touring exhibitions promoting British design in the Far East and Africa will kick off next month, indicating that the design sector remains buoyant despite the global economic slowdown.

The move follows news last week that British product designers are hoping to gain greater recognition in German markets with a touring exhibition, Designed for Use (DW 25 October).

The British Council is taking its ReDesign exhibition, which showcases the UK’s achievements in sustainable design, to China and Kenya from 5 December.

And it is understood that Government trade support service, Trade Partners UK, is set to target Japan with initiatives to promote British design in the New Year.

The China and Kenya exhibition, designed by Mark Bond and branded by Rebecca Foster, will start its tour in Chongqing in China where it will show until 17 December. From 7-20 January 2002 it will exhibit at Guangzhou and then in Nairobi in March for the Designing Tomorrow programme.

Some of the designs showcased include a revolutionary oil platform, a microscopic gyroscope and wheelchairs (pictured) for the Third World.

ReDesign, written and researched by design writer Michael Evamy in consultation with the British Council’s Art, Architecture and Design department, was commissioned by the British Embassy in Oslo, Norway for a state visit of Her Majesty the Queen.

The British Council’s Art, Architecture and Design department promotes UK art and design through its network of overseas offices in a programme of touring exhibitions, overseas workshops and seminars in the UK.